Opinion – Putting up with Barriers 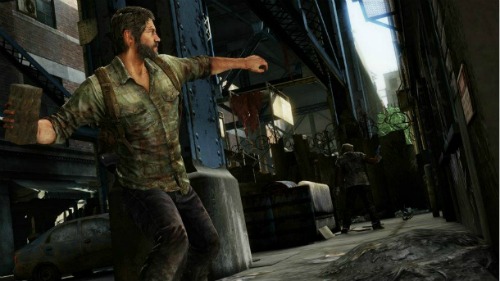 I recently gave Naughty Dog’s The Last of Us a barrier free rating. This decision has actually caused me to have sleepless nights. I worry that I’ve lost credibility with my readers giving a game that is so fraught with QTEs and that has absolutely no controller customization a score that says this game is accessible. You can read my reasons for giving it this score in my review. I don’t want to rehash those. But something needs to be said about the times when I find it possible to overlook a game’s barriers. The Last of Us is a perfect example of it. It doesn’t matter if I couldn’t do half of the QTEs and I constantly needed help, I would still beat the game. This is because Naughty Dog’s latest title is totally worth the hassle of putting up with inaccessibility. I can put up with games for one of two reasons, and The Last of Us satisfies both.

Without rehashing my review (or anybody else’s for that matter), I can say that The Last of Us is extremely well done. The controls are smooth, most of the AI functions without a hitch, and the gameplay is relatively easy. This lets the story drive the difficulty. In other words, it’s not hard to shoot an enemy. But when Joel is pinned down in a square surrounded by fifteen hunters (one of which has a sniper rifle in the building on the other side of the map), then the difficulty becomes greater—not because of the gameplay issues, but because of the actual story moment. This lets players feel exactly what the developer wants them to feel in that instance. As a result, the game is incredibly fun to play, even if it is occasionally punctuated by a QTE or if occasionally the controller setup gets in the way. Another example of this for me would be the Assassin’s Creed series. I so love the feeling of being the ultimate hunter running around the rooftops only to pounce on unfortunate evildoers that I can overlook the game’s sometimes difficult free-running mechanic. After all, this only functions as a barrier in a few areas of the game. The rest of it is more focused on stealth and combat, both of which I thoroughly enjoy.

By contrast, one of the games I am reviewing for an upcoming review seems to be fairly accessible, but the gameplay is so slow and tedious that I find very little joy in the experience. I’m more inclined to be tougher on a game like this because I don’t see it as a fun game in addition to any barriers it might have. When a game is not fun to play, it is easier to see the barriers that come up because sometimes the barriers themselves are what take the fun away from it, and sometimes the barriers simply aggravate gamers who are already in a foul mood because they are playing a weak game.

(2) A Good Story
In previous articles, I have talked about the value that disabled gamers derive from interacting with the stories in games. This is one of the biggest personal benefits for me. The further I can escape out of my wheelchair while playing video games, the better. The richer the story, the further away I get from my own daily life. And while the games aren’t actually real and I’ll eventually have to go back to real life, the more immersive a temporary escape I can get, the better. In other words, the more a story sucks me in, the better I feel when I put down the controller and have to go back to my normal life. The Last of Us has this in spades. I can count on one hand (and possibly one finger) the number of games that have made me genuinely emotional on the level that this title has. I have actually teared up at three separate points in the game, and I’m just under three quarters of the way through. And if what I’m reading online is any indication, I can expect to do the same at the game’s ending.

The result of The Last of Us’s good story is that I don’t focus on the barriers and I just spend my time immersed in that world. There were days when, preparing for review, I would actually have to sit for a while and think trying to remember if I came across any barriers because the story was so good that I completely forgot about any problems I may have encountered while I was playing the game. I was simply focused on processing the revelations and dialogue that I had been privy to during that session.

Once again, if a game has a weak story, it’s easier to be thrown out of the immersive experience, which in turn makes it easier to notice the barriers. A good example of this would be Injustice. Although I love the game for its gameplay, its story is kind of weak. As a result, I wasn’t pulled in deep enough to ignore any barriers that may have existed. Now, it just so happens that there weren’t very many in that title, but if there were, it would have been much easier to spot because of the game’s inability to immerse me in a world that I wanted to go back to.

In conclusion, while I’m not interested in defending my rationale for giving a particular score, it is intriguing to sit down and actually articulate why I enjoy games that I have a harder time playing and how my bias may affect the scores I give.