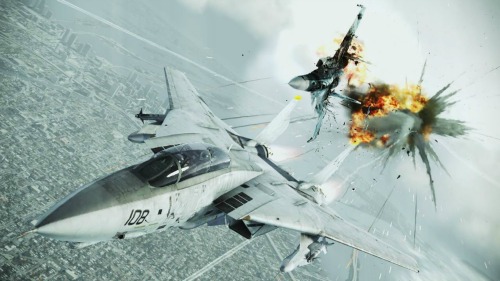 Multiplayer introduces head-to-head battles or squad cooperation for sky domination. Ace Combat Infinity will release exclusively as a downloadable title on the Playstation 3.

The “Online Co-op Missions” propels 4 players to create a unified squadron that either works with or competes against a rival team. Missions are designed around this mode, reinforcing the need for unit cohesiveness in order to accomplish a wide range of objectives from destroying enemy troops to the obliteration of an enemy base.  Rewards are granted for mission completion that allows access to more aircraft types and their enhancements such as special weapons.

The push towards teamwork requires squads to approach the battle with a unified strategy, whether banding together with an allied squadron for a firefight against challenging AI foes or pursuing targets missed by rival teams. Additionally, teams determine their main mission objectives, deciding as a group whether to take on larger missions that require friendly allies or a head-to-head battle against opposing squadrons with a need for strong team dynamics that includes wingman assistance rather than the lone wolf gameplay in order for the team to emerge victorious.

Flight games are often a particularly frenzied type of gameplay with the need to read multiple messages, hear and voice commands, as well control the aircraft simultaneously. The inclusion of a multiplayer mode allows disabled gamers interested in the flight genre access to a larger community playing the game. The accessibility of the gameplay remains to be seen, but we hope that a free demo will give disabled gamers the opportunity to weigh the gameplay requirements against their disability based needs.