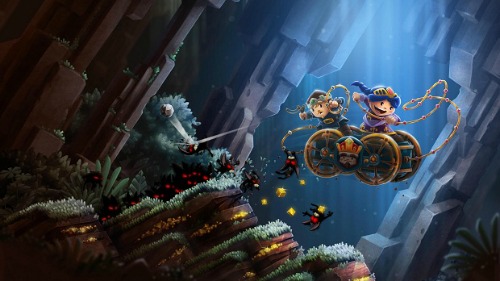 Microsoft’s Games With Gold announced October’s line up bringing Chariot to the Xbox One while the Xbox 360 receives Battlefield: Bad Company 2 and then Darksiders II.

Chariot is a brand new game that retails for $14.99 and is an indie game from Frima Game Studios through the ID@Xbox program. Players maneuver the chariot holding the king’s coffin through a series of underground environments that showcase physics based gameplay. The platformer is playable as single player or as local co-op.

On the Xbox 360, Battlefield: Bad Company 2 is available from October 1-15, 2014 and then Darksiders II can be downloaded from October 16-31, 2014. Both games are popular retail releases that represent two different gaming genres, a first person shooter and a third person action game respectively.

The Games With Gold program is providing both a new game and full retail releases in October. The program gives new game experiences to disabled gamers for free albeit with an Xbox Live Gold subscription. Additionally, the presence of a new game keeps disabled gamers current with the indie offerings, which can notoriously be accessible or inaccessible depending on the disability but the video games’ accessibility is always unknown without firsthand gameplay. Providing Chariot in the Games With Gold program is a step in the right direction after the Xbox One removed the Xbox 360’s requirement that digital only games provide a free demo.