Now On Kickstarter: QuadStick, A Game Controller For Quadriplegics 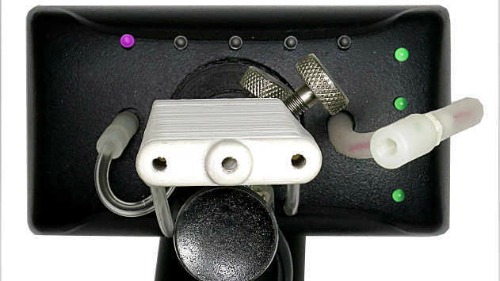 The Quadstick is a mouth and voice operated game controller for quadriplegics that is compatible with Playstation 3, PC, and Android. With 21 days remaining, 254 backers have provided $23,914 in funding out of the $10,000 goal.

The QuadStick features a joystick, four sip and puff sensors, a lip position sensor, and a push switch that become a video game controller by converting USB and Bluetooth signals. With the CronusMAX as an adapter, the QuadStick is playable with the Xbox 360 and Xbox One. Playstation 4 compatibility will be possible with the use of the CronusMAX after CronusMAX adds Playstation 4 support. The addition is in development but there is no estimated delivery date. Currently, Steam support is under development which is possible by creating configuration profiles for individual games. The first game involved with Steam support is Lego Marvel Super Heroes.

Fred Davison, the QuadStick’s inventor, was inspired to create assistive technology after his mother was diagnosed with ALS. Mr. Davidson created the QuadStick with feedback from Ken Yankelevitz who is known for his Quad Control Joystick. Due to health concerns, Mr. Yankelevitz is not currently accepting new orders. Mr. Yankelevitz personally pledged $5,000 for the QuadStick.

Mat Victor, a C1 quadriplegic who is a longtime customer of Mr. Yankelevitz tested the QuadStick throughout its development. Mr. Victor has no movement or feeling from the next down and he has successfully used the QuadStick with a variety of games including BioShock, Journey, and Assassin’s Creed.

The QuadStick ships with a default setting but can be configured by individual users. Additionally, voice commands are possible both for gameplay and for managing the QuadStick with commands for functions such as loading a new configuration file or remapping a button to the lip sensor.

The initial production run in spring 2014 will construct 25 QuadSticks to test its viability as a product. Pledging $399 or more grants one QuadStick, two mouthpieces, a RAM mount stand, and a USB cable which are included in order to ensure that the QuadStick is playable directly out of the box.

The Kickstarter page is here.