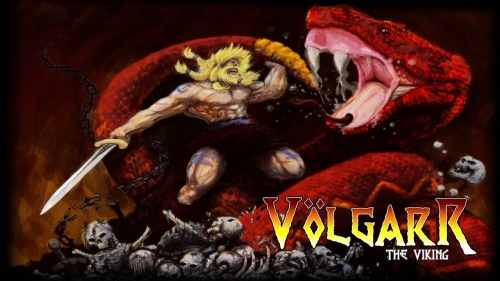 Sorry for the long absence with the weekly freebie – life’s been a bit chaotic, so in an effort to rebalance things, I had to shift priorities away from this. It’s a shame too as there were some good freebies available mixed in with a ton of iffy ones. This week, we’re going to focus on a precision-platformer that hit PC a year ago and later the Xbox One.

It’s a free Games With Gold for the first half of November. Volgarr is heralded for offering up tough-as-nails gameplay that requires precise jumping and action timing. Anyone who grew up with gaming in the ’80s and arcades is used to this style, while younger players may have never been exposed to games of its type beyond a scattershot attempt here and there at something like Ghouls ‘n Ghosts on a retro collection.

As the titular viking, you’ll slice through enemies with your broadsword and absorb attacks with a shield. Physical attacks will go right through them, leaving only projectiles as attacks you can take with any measure of safety. Unlike the GnG games, you can take more than two hits, but like that game, you’ll want to keep hits to a minimum. You can’t take more than five even with maxed-out upgrades. In-game, you start off with things right in the center of your upgrades with a basic wooden sword and then a thicker metallic one that you’re handed that allows you to charge up a spear attack. This charged-up attack can take out a few enemies at once and can be aimed to the left or right, but not up or diagonally.

Your basic sword has no upgrades until the final one, where you’ll do double damage with a flaming sword. This means that you’ll need to learn the sword inside and out to survive long enough to get that upgrade in either one stage or deeper into another one. Beyond a basic slash to the left or right, you’ve got the ability to double jump and do a spinning sword slash in mid-air. This is a key to efficient play as it allows you to both more forward and inflict damage, while a downward strike is a great way to attack foes beneath you and uncover new paths through a level. If you’re lucky, items will also be unearthed, which add to your point total. That will reset upon death as will your progress. There are no save points or save states, but you can make use of checkpoints throughout the game to some degree. Each new level marks a new checkpoint and that’s as forgiving as things get. That may seem brutal, but it’s actually downright forgiving compared to how some 8 and 16-bit classics were. In the case of arcade games, forget it – they were literally made with the intent to drain as much money from you as humanly possible with their difficulty.

The game is tough, but friendly regardless of one’s disability. If your motor skills are in good shape, the platforming and action portions are actually quite fair since the pacing is very deliberate. Unlike a shoot-em-up that throws a ton at you, this keeps the pace fairly slow and requires forethought. The bright graphics and smooth animation are also easy to time with just the naked eye, and since they don’t rely on color all that much, you can navigate the world without issues if you’re color blind. The bright graphics are a joy to behold while the music is perfect. It’s got a fantastic Conan the Barbarian-style score, with a level of depth that very few games of the 16-bit era had. Muting the music was something I did to help concentrate, so if you’ve got hearing problems, you are just missing out on the music and may actually be a far better player as a result. Anyone with an Xbox One and an active Xbox Live Gold subscription should give this game a shot.