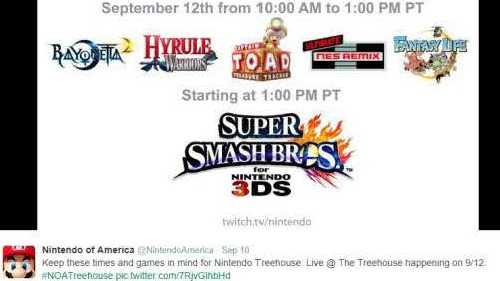 Today, September 12, 2014 Nintendo Treehouse is hosting an eight hour stream of six games but the star is Super Smash Bros. for Nintendo 3DS.

The stream begins at 10:00 AM (or 1:00 PM ET) and will feature Bayonetta 2, Hyrule Warriors, Captain Toad Treasure Trackers for the Wii U as well as Ultimate NES Remix and Fantasy Life for the Nintendo 3DS. Footage of Super Smash Bros.for Nintendo 3DS begins at 1:00 PM PT (or 4:00 PM ET).

The Nintendo stream will be broadcast here. While a release date for the Wii U release date for Super Smash Bros. will not be released momentum around the title is going strong for the iconic franchise with the release of the final fighter roster.

Nintendo is promoting the stream as eight hours of gameplay which benefits disabled gamers who can use gameplay footage to assess the video game accessibility of the titles. Hopefully, Nintendo will show or detail the controls necessary to execute the game play given the gimmicky nature of some past controls such as blowing onto the Wii U gamepad.