Nine Minutes In The Dying Light 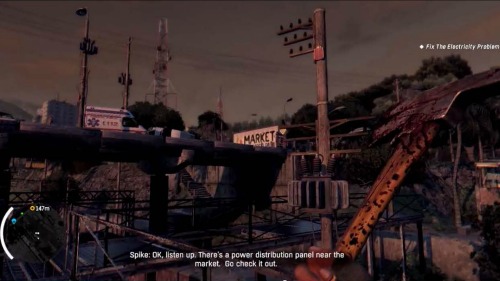 Techland’s upcoming zombie apocalypse game, Dying Light, has released a new nine-minute gameplay video. The game releases in 2014 on the Playstation 4, Playstation 3, Xbox One, Xbox 360, and the PC.

Techland is known for the Dead Island franchise, and the developer continues honing its expertise in the zombie apocalypse with its new IP, Dying Light. Dying Light is an open world first-person action survival horror experience with gameplay centered on the day/night change. By day, players scavenge and craft defenses for the impending nightfall. Zombies shuffle and attack during the day but the night brings out more zombies, more aggression, and new enemies who wait until dark to appear.

The video features the first person free running mechanic that reveals gameplay that is as focused on rooftop running to escape as it is on direct combat. Stamina bars for running and combat require gameplay variety in order to have a fallback plan while the needed stamina renews. When the player does confront enemies, melee combat is a visceral affair of chopping off heads and slamming zombies into walls. Ranged combat includes triggering traps from afar, such as an exploding car, to open up a hole to run through. The gameplay video is viewable here.

Techland’s Dying Light video showcases the gameplay with the subtitles enabled. This addition is particularly inclusive for deaf and hard of hearing gamers to participate in the prerelease reveals as disabled gamers weigh which new games to purchase. Subtitles in gameplay footage and video game promotional materials are such a scarcity that the subtitles in Dying Light’s videos stand out amongst the multitude of games pitching their upcoming releases. The subtitles serve two main purposes – one, disabled gamers are aware that the game includes subtitles and can assess the quality of the subtitles prior to purchase, and two, disabled gamers are included in the prerelease hype amongst a wave of videos that are often not understandable without subtitles.

The gameplay shown in the video includes tapping a face button for quick time events and performing combat moves such as throwing a zombie with a face button press while directing the left analog stick. The footage includes some of the control scheme, which allows disabled gamers to consider if the default controls are accessible to their individual disability related needs. Additionally, the gameplay is based on differences in the day/night cycles, and this footage includes after-dark gameplay. Disabled gamers with a visual disability can assess their compatibility with the nighttime gameplay with its darkened environments illuminated by a flashlight as audio cues signal zombies rushing the player.