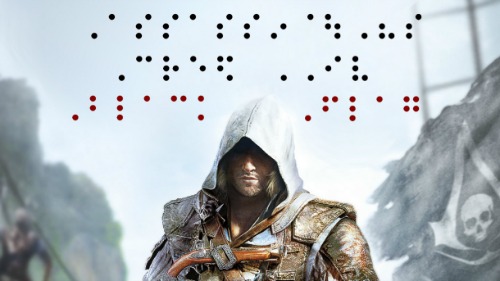 According to the Montreal publisher, “Today dawns a bright new day for game accessibility.” In an exclusive interview with DAGERS, an anonymous Ubisoft employee outlined the steps the company is going to take with the latest Assassin’s Creed title to make it more accessible. Ubisoft hopes to appeal to three groups of disabled gamers: hearing impaired, sight impaired, and mobility impaired.

To make the game more accessible for the hearing impaired, our anonymous source told us that all of the dialogue in the new Assassin’s Creed will be delivered by the characters not only verbally, but using standard American Sign Language. “Thanks to the latest in motion capture technology, all of the characters will use their hands to sign while they speak.” Ubisoft even went so far as to hire interpreters fluent in American Sign Language to do the sign language motion capture for each of the cutscenes. When asked why they would go to such an extraordinary step instead of just including a thorough set of subtitles, Ubisoft failed to respond.

When asked how ASL use will fit into the Assassin’s Creed timeline (as ASL was developed in the early 19th century and is a uniquely North American language, and other countries such as Britain and Australia have their own sign language), the Ubisoft employee responded, “You do know that this is a story about a conspiracy theory between Assassins and Templars? We are not writing a history book.”

We followed up by asking if the player will have the ability to manipulate the camera during dialogue to zoom in closer to the characters. In response to the Ubisoft employee’s blank stare we clarified that players would actually have to see players hands in order for sign language to be useful.

To make sure they include the sight impaired, our source stated that they were going to use a braille subtitle system that will communicate all the game’s ambient and cutscene dialogue. The braille text will appear onscreen over the original text.

Once again, our source was unable to answer our follow-up question of how this would actually help someone who couldn’t see the screen in the first place. Ubisoft attempted to assuage this fear by also announcing that the game would ship with a new, tactile peripheral that will allow the in-game braille to be readable for the sight impaired. When asked how a sight impaired player is supposed to use their hands to read braille and manipulate a controller at the same time, the Ubisoft employee only touted the device’s other uses such as to provide full immersion by spraying salt water on the player’s face and using a UV light to provide sunburns.

But perhaps the most striking part of Ubisoft’s plan for the accessibility of Black Flag is Ubisoft’s commitment to accessibility for the mobility impaired. “We understand that during the historical period in which Assassin’s Creed IV: Black Flag is set, the Caribbean was incredibly difficult to navigate for people with limited mobility. But we at Ubisoft are committed to making the game accessible to all. We will voluntarily have our coders put ramps in all the buildings and a ramp on every ship so that mobility impaired players can go everywhere within the game,” the source said. Beyond that, he further outlined their vision, mentioning plans to put automatic doors on all the jail cells in the game, and implementing a policy which requires cannons to be easily fired by push button.

It remains to be seen what (if any) effect these changes will have on the accessibility of Assassin’s Creed IV: Black Flag, which launches in North America later this year.

Source: April Fools! Thanks to GIO’s LetMeGetToACheckpoint for the tip.