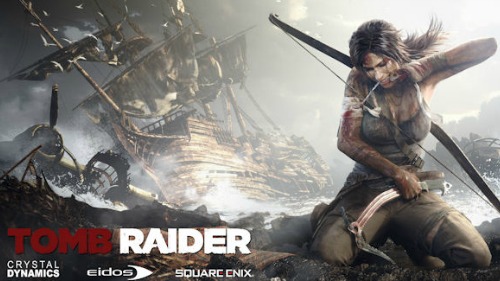 Choosing my Game Of The Year is a no easy decision, especially when the transition between console generations gives us the best of the old generation and the promise of the new. However, as a deaf gamer who perseverates on the story, my Game Of The Year Pick began 2013 with early promise that held fast to the end of the year. The game is Crystal Dynamics’, Eidos Montreal’s, and Square Enix’s Tomb Raider.

Tomb Raider was my most anticipated game in early 2013 on the sheer premise of a playable female protagonist—so much so that I preordered the game and anticipated picking it up all day on its March 5, 2013 release. Still, the game’s accessibility for the deaf and hard of hearing surprised me.

The initial menu offers an “on” or “off” option for subtitles. The menu selection is typical for a video game but leaves vague how the video game developer defines and designs subtitles. Immediately, upon the game’s opening cinematic, I was shocked. The subtitles function as closed captions which are not often included in games. The text is clearly readable on a black background as well as the initial speech tagged with the character’s name and color coded for the character. In the opening sequence, the ocean’s storm rocked Lara Croft’s ship, and the subtitles remained readable no matter the chaos occurring onscreen. The story continued with Lara’s capture, and onscreen the accompanying subtitles appeared, “sounds of something heavy being dragged / water drips / Lara groans / a heavy thump / creaking rope.”  An entire non-verbal scene with text describing the sound design was utterly unexpected with the simple menu option for subtitles on or off.

Audio cues depicted in the subtitles during the cinematics were a revelation. Understanding sound is not an inherent skillset but is learned. Without a visual cue to corroborate a sound and without asking a hearing person what the sound is, I am often bewildered at sounds in the periphery of my hearing such as a buzzing that is the HVAC system running, a drumming that is running water, or a faint whistle that is the fire alarm. Tomb Raider’s audio cues allowed me to enter fully into the narrative without the stress of puzzling over the sound design. The visual descriptions of in-game sounds allowed me to define quickly the sounds I heard and appreciate the sounds I did not hear. In one instance, I was able to understand why Lara appeared dejected because her plea for a response from other survivors into a walkie-talkie resulted in “.” It was little moments like this that gave me full access into the game. For me, sounds that characters react to (such as various beeps, chirps, and environmental sounds from wind to water) are the hardest to hear and, if heard, to identify.

The other most difficult sounds for me are social cues. When speaking, my focus is my direct conversation, and I am unable to follow or participate in what is being said around me. In Tomb Raider, the audio cues allowed me access into moments that are otherwise absent in my game playing. For example, early in the game, Lara watches video footage of a conversation that occurred on the ship. The lulls in the dialogue were interjected with descriptions of the background interactions. These appeared as, “” later followed by “.”

The subtitles stack, which is particularly helpful for conversations. While the text is color coded for each character, during a conversation one character’s speech is italicized to further differentiate between the characters.

As for the gameplay, while audio cues are not always provided, the moments with audio cues show how helpful the audio cues are. The subtitle “” pops up when a wolf nears during a sequence where Lara lies in wait to attack wolves with her bow and arrows during a thunderstorm. Rather than the trial and error approach typically required to understand such a scene, the text by means of the audio cue to indicate Lara’s faster breathing gave me the same access that the hearing received, and any ensuing death felt fair.

Additionally, Crystal Dynamics included other gameplay features that provide visualization for audio cues. Guards’ speech is subtitled for the observant gamer who prefers sitting in hiding while overhearing the mini-stories. In combat, Lara is capable of stealth or direct assault. Upon the presence of nearby enemies, Lara automatically crouches. Because I did not hear the murmur of their faraway speech or footsteps, it was only Lara’s crouch that made me aware of their proximity. The visual cue allowed me to play stealthily without stumbling unknowingly into enemy encampments.

While I am a deaf gamer who is hugely appreciative that Tomb Raider’s subtitles were designed for the deaf and hard of hearing, choosing Tomb Raider as my Game Of The Year is also an illustration of the multifaceted needs of disabled gamers (as a result of which, accessibility in video games most often does not mean accessibility for all disabilities). DAGERS’ Editor-in-Chief, Josh Straub, who has a fine motor disability, also reviewed this game, rating it as inaccessible for gamers like him, due to its nature as a third person shooter requiring simultaneous two-handed controls. You can read his review here. Tomb Raider’s inaccessibility for disabled gamers with fine motor disabilities does not take away from the reality that its subtitles provide complete accessibility for the deaf and hard of hearing. It simply represents the fact that accessibility is not a uniform feature for all disabled gamers.

Tomb Raider reminded me that full accessibility for the deaf and hard of hearing is not impossible, nor is advocating for this level of accessibly asking “too much” of developers.

The difference in my gaming experience is immeasurable when subtitles are always readable and audio cues are depicted. For the duration of at least this one game, I am not straining my hearing to achieve the same understanding as hearing gamers, and I am not worried about missing out on the gaming experience due to an inability to set up my ideal gaming environment. Instead, I load the disc tray knowing that if my hearing aids malfunction, I can still play and enjoy myself.