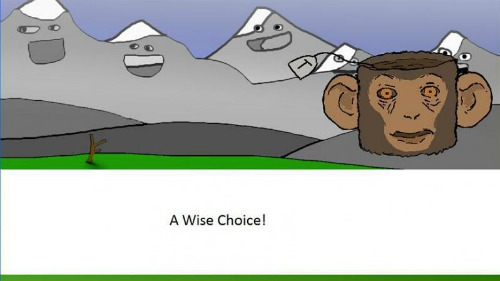 This year at Global Game Jam, thousands of teams of programmers met at venues around the world. Each team’s goal was to create a game. The catch? They only had 48 hours to do it.

As part of GGJ, there was both an “Accessibility Diversifier,” an optional undertaking which encouraged any of the teams to try to include accessibility elements in their games, and there was an “Accessibility Challenge,” a competition to create a game built completely around the idea of game accessibility. The winner of this challenge was a British team made up of programmers Charlotte and Catherine Woolley, along with Gary Napper.

The game they created, A Wise Choice, was an adventure game based on the idea that “your choices define who you are.” While the game was aimed at younger children, the storytelling reminded one of a Suda-51 game, such as Black Knight Sword. But what was truly impressive about the game was that it tried to include as many disabled gamers as possible. For those who were deaf, the game featured large, readable text boxes throughout, which explained what was going on. For the blind, the game was fully voiced, telling players what was going on, even describing the landscape. And finally, the game controls were so simple that even profoundly disabled players relying on head switches could fully enjoy this game.

People may look at this game and see something that has limited interactivity and therefore hardly resembles a game. However, this is the wrong way to look at it. Even though it doesn’t have the same production values as AAA titles and even some mobile games, the remarkable thing here is that this team of three programmers was able to make a game that was profoundly accessible over the course of a single weekend.

You can download and play A Wise Choice here: