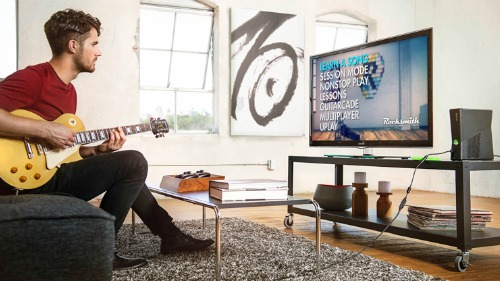 Ubisoft announced new tracks for all versions of Rocksmith 2014 Edition which releases on October 22, 2013 on Xbox 360, Playstation 3, PC, and Mac.

Notable additions for budding guitarists are Queen’s We Are The Champions and Tom Petty And The Heartbreaker’s Mary Jane’s Last Dance.

Rocksmith 2014 Edition allows players to plug in a real guitar or bass into their video game platform and provides an on screen interface, similar to Rock Band and Guitar Hero, but for actual instruments already owned by the player for playing the songs on the musical instruments in real life. Rocksmith 2014 Edition will be available with and without the cable included in order to allow those who purchased a previous iteration of the game a $20 discount.

The video game version of instrument playing that we previously experienced, most notably with Guitar Hero and Rock Band, provided guitars, bass, drums, and a microphone as a video game controller. Musical instruments often pose a variety of obstacles for the disabled but the impact of each person’s disability is unique.

Stringed instruments traditionally pose a challenge for fine motor skills disabilities but adaptive equipment for guitar and bass is available for those interested that does not require a change in Rocksmith 2014 Edition’s gameplay. The deaf and hard of hearing who enjoy music may find the visual gameplay prompts for learning how to play the guitar or bass a benefit over learning music solely based on sound and rhythm. For visual disabilities, the gameplay interface is color coded with red, yellow, blue, orange, green, and purple along with flashing notes and multiple icons. Whether or not the visual display is customizable is unknown.

Do you play a musical instrument?

Do you play the Rocksmith franchise? If so, how do you feel about the game’s accessibility?