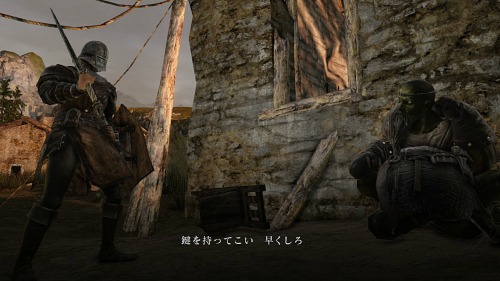 Dark Souls II releases on March 11, 2014 on Playstation 3 and Xbox 360. The PC edition will release shortly following the console editions. There is no definitive date for the PC release.  New screenshots teases the upcoming game with a focus on new characters.

See a few of the screenshots below:

An undead player at a bonfire.

A battle against a particularly ugly giant.

An illusory hint, the shadow of a different player’s actions, of an uncoming enemy.

Maughlin the Armourer sells her wares.

Merchent Hag Melentia carries her goods wherever she goes.

Fire always wins.  Or does it?

Maximum health decreases after deaths with no souls retrieved with up to 50% of health lost and is recoverable only by becoming human.

The Dark Souls franchise is known for its punishing difficulty but with a unique Player versus Player multiplayer that provides both in-game assistance and sudden invasions. For disabled gamers who enjoy the franchise note changes in Dark Souls II’s PvP in assessing whether the game provides needed disability related features.

In Dark Souls II players can be invaded at all times, whether human or undead, whereas in Dark Souls players who remained in undead form ensured that no invaders startled their gameplay. However, joining the covenant, The Way of Blue, will automatically summon a Blue Sentinel, a phantom ally, when the player is invaded by an enemy phantom. Additionally, phantom allies are on a timer based on the size of the soapstone used but the time lessens with each of the phantom ally’s kills. This system allows the phantom allies for potentially longer periods and in more areas than a single boss battle.

As per Dark Souls’ tradition, the changes adds difficulties while providing new solutions. Disabled gamers should simply remain aware of whether the gameplay changes meets their disability related needs to ensure that death in Dark Souls II is based on its famed difficulty and not due to inaccessibility.