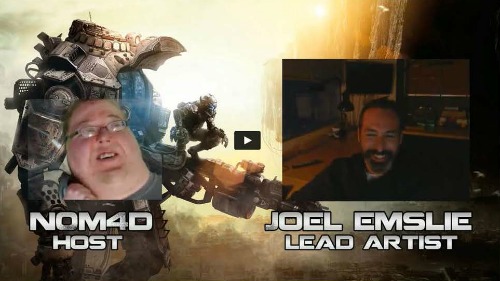 Randy Fitzgerald, known in the gaming community as N0M4D, is a disabled Pro Player and he hosted a Twitch Stream with Joel Emslie, Titanfall’s lead artist.

N0M4D has Arthrogryposis, a muscle and joint disorder that substantially limits the movements of his arms and legs. He plays using his lips and chin with a modified controller. In gaming tournaments, he uses a bracket that holds his controller near his face and at home he lies on his right side with his controller attached to heavy block of wood with velcro.

One of N0M4D’s video game accessibility accomplishments is the development of the N0M4D controller layout for first person shooters. In 2007, his feedback to the Call of Duty 4: Modern Warfare beta resulted in the N0M4D layout that allows for toggling aim rather than continually holding the trigger while running and shooting. The N0M4D is now a FPS standard, particularly within the Call of Duty franchise.

Below are a few highlights from the Twitch stream and the entire video is available here.

Titanfall includes an algorithm that prevents quick scoping, a method that allows players to use the scope for aim accuracy but fires the shot before fully looking through the scope thus shooting aimed shots faster. The algorithm randomizes the reticle by allowing the shot within the reticle spread but not dead center.

The Titans are meant to evoke individual personalities which resulted in design decisions such as the Titan’s having fingers. Additionally regarding the Titans, Titan drops can kill both other Titans and Pilots. No tool, class, or ability exists for repairing Titans.

Respawn’s focus on Titanfall is on the gameplay customization including weapons and attachments. Aesthetic customizations such as Titan skins and colors for the cockpit are not in the game.

Visual features in the game informs gameplay for players who use the visual cues. For example, a Pilot loadout that includes an exposed face character model more easily blends in with the grunts. Titans have red areas of critical points that are weak spots with the Ogre Titan having the smallest exposed areas. Or players who don’t prefer playing as Titans can set their Titan in guard mode and snipe attacking players.

There is no Kinect support for Titanfall.

Mr. Emslie’s preferred loadouts are the Stryder Titan due to the Titan’s additional mobility and he equips the Stryder with a quad rocket levelled up into a rapid fire rocket. For Pilots, he enjoys SMGs but he also wants to take long shots resulting in using a DMR equipped with an AOG scope and suppressor for off the radar shooting. His loadouts are not yet published weapon information.

Mr. Emslie’s favorite gameplay moment so far is a YouTube video that shows a pilot dismounting their Titan, double jumping backwards, and kick killing the pilot rodeo killing the titan.

The video ends with dancing, depending on your personal definition of dancing, in support of viewers purchasing Titanfall at launch.