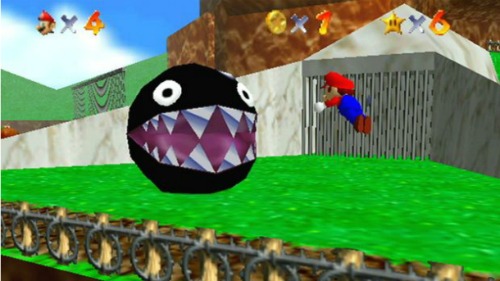 Well, I am depressed. This month saw two of Nintendo’s biggest exclusives release, and both turned out to be inaccessible for one or more type of disability. It is tempting to give up on Nintendo after this—tempting, but foolish. So to salve my pain over Pikmin 3 and Mario and Luigi Dream Team, I’ve created this list of my five favorite Nintendo games of all time. They are all reasonably accessible, and definitely worth a look whenever Nintendo’s new games prove unplayable.

Sadly, this was the first Legend of Zelda game I ever completed on my own. But its beautiful visuals, great music, and engrossing story were just the beginning of why Legend of Zelda: Windwaker is one of those games which, if you were trapped on a desert island and could only take two games with you—this would be one of them. Although the anime-like art style may have turned off many fans of the series who were looking for the more realistic aesthetic of Ocarina of Time or Majora’s Mask, those who bothered to give the game a try were soon rewarded. The gameplay was the most polished that Zelda fans had ever seen. For the first time in the franchise’s history, it felt like finesse was actually an option when engaging various enemies. In addition, this was also a more forgiving iteration of Zelda than previous titles, making it easier for players with fine motor disabilities to recover after failing at a puzzle or falling to their doom. The one complaint many gamers had, that sailing was boring and you spent too much time aboard the King of Red Lions, I didn’t find to be true. There was enough variety in the game, and the music was so pretty that I was content sailing around for hours.

Super Mario 3D Land
Even though it is a lesser-known title, I will always think of Super Mario 3D Land as the one that got me interested in Mario handheld games again. I had played the original Super Mario Land in the 90s, on the old grey brick Game Boy. But because of my disability, I was never able to advance much beyond the first world. And as a little kid who didn’t know any better, I thought this meant that all Mario handheld games were equally inaccessible. However, when I picked up Super Mario 3D Land, I was shocked at how forgiving the gameplay was. It was a beautiful game world with tons of different enemies and challenges, most of which I could overcome thanks to some “new features” I had not seen in previous Mario games, such as the power up that gives you invincibility if you die too many times in a row. But the thing that really makes this game stand out is how forgiving it was as a whole—not just thanks to new power ups. Halfway through the game I had a full complement of lives and I actually started gaining them. It was clear this was not the Mario I remembered from when I was a kid.

Super Smash Bros. Melee
There is something incredibly fun about taking your favorite characters from all around the Nintendo world and watching them beat each other senseless. That was the attraction of Super Smash Bros. The original was good, but Melee just took it over the top: more characters, more environments, more fun. The gameplay is set up to be extremely forgiving (if hard to master). And I will always have good memories of waiting until everybody else was down to one life and then grabbing them with either Donkey Kong or Kirby and walking off the edge of the stage. Yes, I know it’s cheap. But a win is a win, and I’ll take every win I can get!

Super Mario 64
Although I said that I had sworn off Mario Games from the mid-90s until 2011, there was one exception: Super Mario 64. My first exposure to the concept of an open world, Super Mario 64 was the first time I experienced the “Huh. I can’t get past this area, but I can go and do something else” feeling. For its time, its visuals were great, and it was pretty mind blowing for a squirrely kid like myself to put on the all-powerful wing hat and go soaring around Peach’s castle. But the hub world was just the appetizer. Jumping through the paintings immersed Mario in many unique levels that I can still remember having been impressed by as a kid. The diversity alone would earn Super Mario 64 a spot on this list. But add in the great gameplay and the “impressive visuals” and my nostalgia meter is off the charts.

Legend of Zelda: Collector’s Edition
Ok, I’m not even going to fake it. This last one is a complete cheat. But if you are lucky enough to own one of these very hard to get GameCube disks, you’ll agree with me. It’s probably the single best “game” for the GameCube—even though it is not really a single game. Having the ability to play the original Zelda, Majora’s Mask, and Ocarina of Time on the same system is great. Throw in Legend of Zelda II: Link’s Adventure, and that’s icing on the cake (even if the game itself is not worth spending much time in). In case you haven’t guessed, I’m a big Zelda fan, and this is the only way I could get all my favorite Zelda titles on one list and still claim that the article was not all about the Zelda franchise.