My Top Fine Motor Accessibility Highlights of This Generation 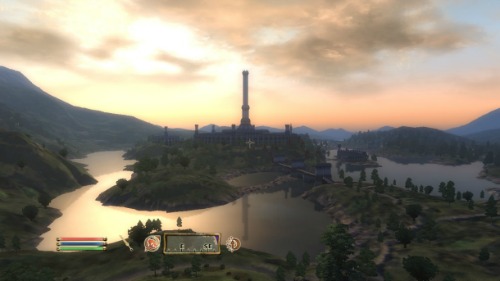 Believe it or not, next gen is here. For the last nine years, we have been treated to games on the Xbox 360, PS3, and Nintendo Wii, and various handhelds. Before we start throwing dirt on the grave of the seventh generation of video games and dive headlong into the eight generation, it is fitting to take one last look at some of the highlights of the now previous generation and give them their dues for their high level of fine motor accessibility. This list is based strictly on games that I have played, so there may be more accessible games out there that I have not experienced. With that said, let us begin.

The first year of the seventh generation saw many crossover titles. One of the first seventh generation exclusives was Elder Scrolls IV: Oblivion. In addition to being the standard for massive, open world games at the time, the sheer amount of content ensured that players were never stuck doing inaccessible activities. The other thing that helped this game’s accessibility was the extreme level of character customization. Players had the ability precisely to tailor characters from ten races with several different options for skill customization, which ensured that a player could design an experience that helped compensate for their disability. Not very fast? That’s ok. A heavily armored, hard-hitting orc doesn’t need to move fast. Don’t have the reflexes for close combat? Then you can build a ranged archer or mage that kills his enemies before they even know they are dead. This kind of flexibility as well as the extremely forgiving nature of the gameplay and the ability to save anywhere gave fine motor disabled players the experience of a medieval fantasy world with very few barriers.

2007: Mass Effect
2007 saw the release of one of the great Microsoft exclusives of all time. Mass Effect is the first installment of a trilogy that would come to define the height and breadth of science fiction storytelling for the video game medium. Many fine motor disabled gamers, including myself, had access to this story thanks to the extremely forgiving gameplay, the ability to stop action and give your squad commands, and another heavy emphasis on character customization. Mass Effect gave players not only the option to create a character that helped the player compensate for their challenges, but also a storyline that focused more on story telling than just action, which meant that players were just as likely to spend time uncovering conspiracies in the highest levels of the Citadel as they were to spend time gunning down mercenaries in a back alley brawl. Because of this method of storytelling, players with disabilities could enjoy this game even if they didn’t normally have the ability to enjoy first or third person shooters.

2008: Fallout 3
Fallout 3 was yet another game from the creative minds at Bethesda that was highly accessible for players with fine motor disabilities. While the customization was somewhat streamlined from games like Oblivion, the combat was much more forgiving. The main thing that made Fallout 3 more accessible was the VATS interface. This system allowed players to stop the action completely and focus on a particular target (such as an enemy’s head or arm, or a nearby explosive barrel). This ensured that players with fine motor disabilities could always pause the action and take a shot that would damage the enemy in the worst way possible, which made the combat both incredibly exciting and highly accessible. A lot of people complained that infinite use of the VATS made the game too easy. But for fine motor disabled gamers, it was just one feature that allowed them to enjoy this post-apocalyptic paradise.

2009: Batman: Arkham Asylum
Thanks to the Warner Bros. Humble Bundle, I have immersed myself again in Batman: Arkham Asylum. I had forgotten how truly accessible it was. The developers at Rock Steady really took the effort to make the player feel like the Dark Knight. Combos seamlessly flow using the simplest of button presses, and there is very little need to aim when throwing a batarang with the quick batarang option that has Batman automatically throwing projectiles at the nearest vulnerable target. In addition to the highly accessible combat, the heavy emphasis on stealth is another feature that makes this game so accessible. Not only do players have the option, they are actually encouraged to slow down and take their time when engaging large groups of enemies. In fact, stealth segments where Batman will be immediately killed if seen are just as plentiful as or even more prevalent than the arena brawler sequences that use the game’s combat mechanic. These sequences force gamers to slow down and take their time, which helps those with fine motor disabilities by making it easier to succeed since their fine motor impairment has less of an impact on the gameplay. Combine that accessibility with a great story and all-around solid game play and it does not take the world’s greatest detective to figure out why Arkham Asylum is on my list for 2009.

2010: Pokémon HeartGold and SoulSilver
In all fairness, I could have listed every single Pokémon game of this last generation because of the Pokémon series’ inherent accessibility. But Gold and Silver legitimately represent the best Pokémon games to be released (at least before the series’ visual and mechanical reboot in Pokémon X and Y). This is because they took all of the best elements of the series and put them into one game. They took the more expansive world of Gold and Silver (with sixteen badges instead of the regular eight) and combined it with a feature not seen since the ‘90s with Pokémon Yellow, where Pikachu would follow you around outside of his Poké Ball. Only in HeartGold / SoulSilver this feature was greatly improved by allowing a player to have any Pokémon outside of its Poké Ball. If you are a Pokémon fan like me, this was a dream come true. I had always wondered if they could do this with Pikachu why they could not do this with other Pokémon as well. You have got to admit it is pretty cool having your Lugia following you around Goldenrod City later in the game.

2011: Elder Scrolls V: Skyrim
2011 saw the release of yet another highly accessible Elder Scrolls title. This time, all of the features of Oblivion were back and better than ever. Extensive character customization using beautifully rendered character models was now the norm. And choosing between more than a dozen skill tress actually made the game more difficult because players always had the choice between two or three equally awesome or accessible upgrades. But this high level of accessibility did not stop at designing your character. With over 500 hours of quests and other content in the main game alone (not including expansions), even the most severely fine motor disabled gamers would be extremely hard pressed not to find something in Skyrim that they could do and do well.

2012: XCOM: Enemy Unknown
Last year’s GOTY was XCOM: Enemy Unknown. Looking back on it, I still think it represents a high point for accessibility in this generation, especially for those with fine motor disabilities. The underlying concept of its turn-based squad combat is so uniquely accessible that it was not only playable with a single hand if necessary, but also put all players—no matter their physical ability—on the same level. This is a unique feature in the gaming world because in many online multiplayer matches it becomes very apparent to the disabled player how their disability negatively affects gameplay. XCOM: Enemy Unknown did not have this problem because the game was completely accessible both in its single player and multiplayer components. This ensured that, no matter which experience you were looking for, a player with physical disabilities could enjoy this game to the fullest.

2013: ???
What? Did you think I was going to give you my game of the year already? Sorry! All I will say is that the game in this spot redefined both storytelling and fine motor accessibility by including features like on-the-fly difficulty adjustments and a story that did not rely too heavily on stiff QTEs. The gamers who played it will attest that it had a deep impact on every last one of us.