My Top Auditory Accessibility Highlights Of This Generation 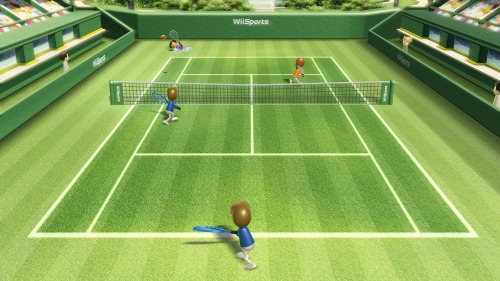 A good video game is different than an accessible game. My experience with the PlayStation 2/Xbox/GameCube console generation left me wary of the latest in video gaming due to the rise in voice acting, leaving subtitles and closed captions behind. For the now old generation, I was not a day one buyer. Instead, I waited until a few years later.

Reviewing the games played in the past few years, particular games definitely stood out as the most accessible for deaf and hard of hearing gamers. I only bought my Xbox 360 in 2010, and for a few years prior owned a Wii that operated alongside my PlayStation 2—both with cheap games, alleviating the risk of wasting too much money due to the scant information about game accessibility for the hearing impaired. While I did not play the games in the chronological order of their release, I enjoyed the time spent with each one whenever I got the opportunity to jump into the title.

My first console in the generation was a Wii, partly due to finances and partly due to a desire to follow the newfangled motion controls. Wireless motion gaming was a revelation at its release as a new way to game. With Wii Sports, Nintendo turned a tech demo that accompanied the console into a successful game franchise. Oftentimes, a new console generation rolls back the hard won accessible features that we asked for throughout the previous generation.

For Wii Sports, the combination of motion controls and the Nintendo approach kept the new technology accessible for deaf and hard of hearing gamers. Other than the bouncy and upbeat music, no spoken dialogue or audio cues are required to play, and all instructions are provided visually. As a result of the ease of access into the new gaming experience, I spent an entire summer determined to best the Wii’s AI in tennis. (I failed.)

Most importantly, my enjoyable introduction into motion-controlled gaming led to other new experiences. Due to my newfound fascination with tennis, I picked up a tennis racket in real life. I also learned that I find bowling boring whether in real life or in a video game. The swinging-the-bat mechanic in baseball was fun, but I later picked up The Bigs on the Wii specifically for a more in-depth baseball experience in motion gaming. When I finally approached the “PlayStation 3 or Xbox 360?” decision, I choose the Xbox 360 because I was excited to try a different type of motion gaming.

No discussion of the best video games for the deaf and hard of hearing is complete without including The Orange Box. Valve’s 1998 game, Half Life, did not include subtitles or closed captions. Valve used the ensuing complaints not only to understand what the deaf and hard of hearing community needed but also to set the standard for closed captioning in video games—a standard that remains unsurpassed.

While The Orange Box was highly regarded, I put off the purchase, instead diving into more recent and more graphically stunning games. In a fun twist of fate, I bought The Orange Box at a video game store near my audiologist following an appointment that left me upset and frustrated with the ongoing degradation of my remaining hearing.

Booting up Portal, I was stunned because the menus offered a closed caption option. Upon playing, the closed captions provided text for audio cues. I have gamed from a young age and grew accustomed to subtitles in video games and closed captions for all other media. Subtitles are based on the premise of a foreign language translation, whereas closed captions are intended for the deaf and hard of hearing. Never having played a video game with closed captions, the clear visualization of the audio cues via text shocked me with its impact on my gaming. I felt as if I had truly played the game rather than having been played by the game, constantly guessing at information that hearing gamers instantly incorporate into their gameplay. Actually knowing to carefully walk into the next room due to the closed captions displaying “[far away energy blast]” let me live or die smiling, knowing that my actions were based on the gameplay, not a cheap and confusing death due to my inability to follow the audio clues.

While some deaf and hard of hearing are musically inclined, I am not. I completed assignments for grade school music class by pressing my ear against the television’s speakers but still guessing at my answers to the assignment.

After playing an iteration of Rock Band at a friend’s house in classic living room co-op, I was hooked. Initially, I was hesitant. My friend only played the drums, I adamantly refused the microphone, another friend claimed the guitar so I was handed the bass. Certain that my utter lack of rhythm doomed my band, I tried my best with a few practice songs.

While I accustomed my fingers to the controls of simultaneously stroking the guitar strings while pressing the correct button on the neck, the visualization of the music struck a chord (pun!). By following the visual prompts, I “heard” the music better. I was unfamiliar with the music and unused to a sense of rhythm, but by playing bass the stronger beat resonated with me and showed me the song’s tempo. Visually associating the audible music with my finger’s movements without relying on the sound taught me music in a new way.

One of the first games that I picked up with my Xbox 360 was Dragon Age: Origins. The fantasy world in this video game stole my attention.

Not only does the game feature the setting I longed for as a child (wanting to see a world remotely akin to my obsession with the Arthurian legends come to life), the game also includes a detailed narrative with all conversations and possible responses subtitled. Even casual conversations outside of cut scenes feature text above characters’ heads. Of course, the feature was at first confusing, and it took me an hour or two playing to understand that characters in my own party were talking in the background noise, and that I had to correctly position the camera to catch their discussion. Eventually, I mastered walking backward. Plus, the text-based storytelling brought a smile to my face. Storytelling without a high-resolution cut scene but with text describing the scene evoked early gaming days without worry about missed audio.
Additionally, the real-time RPG combat did not rely on sound. Enemies spawned clearly and at no point did I fear death because I could not understand the enemies’ speech or recognize impending doom by an audio cue. Certainly, I died a ton, but not due to sound cue confusion.

The Mass Effect franchise is my favorite. I remain thankful that Mass Effect was my very first game played on my Xbox 360. It made me a fan of the combat wheel.

Another Bioware game with a deep narrative, Mass Effect includes subtitles for all conversations. Personally, I enjoyed how the conversational options oftentimes differed slightly from the initial conversation to the actual response. The introduction of the paragon/renegade option kept me engaged in lengthy cut scenes and awaiting the visual trigger for a potential conversational option. As a paragon player, my curiosity spurred me to trigger the event, whether paragon or renegade, just to see the additional story.

The combat wheel is my favorite gameplay feature. Shooters, whether first or third person, typically have urgent gameplay. Pausing the game with the combat wheel, surveying the battle ground, assigning the next moves for my squad mates, and jumping back into the fight let me participate without worry of missing key audio cues.

Deus Ex: Human Revolution is one of my favorite games overall in the generation. Being able to go in either guns blazing or slinking through the shadows provided accessible gameplay options. Additionally, the game discussed disability as a narrative.

With a new director’s cut recently released that balanced the severely unbalanced boss battles and tucked in the DLC (The Missing Link) into its chronological place in the game’s timeline, the game’s shortcomings are mitigated. Prior to the director’s cut edition, stealth gameplay was effectively punished at the boss battles.
With augmentations to humans providing “better than” abilities, the question of using technology for improving basic human senses arose. Providing no answers, the game seamlessly poses questions to the player; an NPC sobs begging the player for death because his wound requires life in a wheelchair, and the question is asked whether or not whether a woman in treatment for chronic depression should be permitted to adopt a child.

2012 was a competitive year. The last full year for the console generation, 2012 featured multiple games that provided accessible gameplay. Most notably in competition with Dishonored were XCOM: Enemy Unknown and Mark of the Ninja, all of which let deaf and hard of hearing gamers into the gameplay with equal access.

Dishonored’s win is based on its gameplay, which let me be stealthy on my own terms. The premise of a non-lethal assassin fascinated me, and the game itself presented alternative doom scenarios for each target that were arguably worse than death. It was thrilling to determine guard location, plan my next move (with unlockable abilities that provided visualization of enemy locations and their field of vision) and slink up from behind with a blink. Mastering the combat against the horribly underprepared guards became a thrill when matched against enemies with similar abilities. Playing the game was engaging and just sheer fun without the worries of missed sounds crucial for advancing without needless aggravation.

Of course, character dialogue is well subtitled, and with a silent protagonist his replies are clearly subtitled.

Ironically, the most accessible games for the deaf and hard of hearing came at the beginning of the console generation, due to Valve’s hard work and ongoing commitment to closed captions. Yet, a game this year surprised me with the closest to closed captions I have seen apart from Valve titles. Perhaps, game developers will pick up on the cues and make this uncommon standard common. This title made that ideal seem possible. Which title? Coming soon with my Editor’s Choice. announcement.