My Top 4 Accessibility Disappointments of This Generation 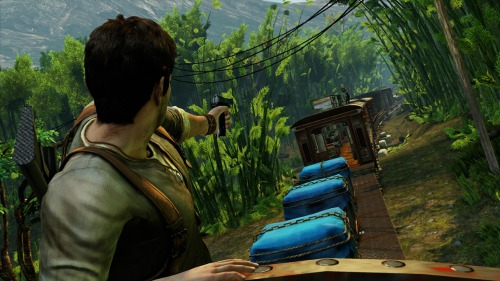 Unlike most articles like this, these games will be in a particular order, with number four being the biggest gaming disappointment I encountered this cycle. That said, let’s begin.

Uncharted 2 garnered many 2009 game of the year awards—and with good reason.  The story and voice acting were immersive enough to draw even the most cynical gamers into its deep story. The characters were as fun and relatable as any novel, and the gameplay mixed storytelling, cinematic moments, and adrenaline-pumping action sequences in a pitch-perfect mixture that would have pleased most gamers. The reason that this otherwise phenomenal game is on my list of biggest disappointments this generation is because the game was literally almost beatable. I progressed 90% of the way through the game before I encountered a QTE that I couldn’t pass. When I encountered it, I encountered more than one. I encountered several. That means that this otherwise barrier free game was holding me hostage just inches from the finish line while I tried to roust up somebody to help me. The fact that I got so close and was yet still unable to beat that game is why this game is on this list. Coincidentally, Uncharted 2: Among Thieves was the impetus for starting this website.

This is going to sound incredibly fanboyish, but I can’t help it. I still think that Xbox Live, when it originally came out, was a rip-off. Now granted it has gotten better, offering more than just the “privilege” of playing multiplayer for a monthly fee. But the fact that I would have to pay an extra fee on top of my system and games just so that I could play online was what deterred me from getting Microsoft’s system when I was in the market for this generation’s hardware. The fact of the matter is, I (like many disabled gamers and college students) was on a limited income, and I could barely justify the expense of a new system, let alone an extra monthly fee just for a feature that on all previous systems had been free. It was for this reason that I avoided getting an Xbox for as long as possible. Until I started this site, I kind of had a fanboyish grudge against Microsoft that they would dare to charge for multiplayer. Now thankfully, they are offering more than just online service, and I can justify paying $15 per month if I get one or two free games out of the deal in addition to online multiplayer.

Batman has always been my favorite super hero, so I was ecstatic when Arkham Asylum was announced, because it looked to be the first legitimately well-done Batman title in ages. I was not disappointed. The game was dripping with cameos from various DC villains, featured all the nostalgia of Mark Hamill’s Joker and Kevin Conroy’s Batman, and actually featured a story that kept me going. Sure, there was the occasional stiff QTE, but I was able to get past them and beat the game entirely without help. Once I had finished this, I was equally excited to play the sequel, Arkham City, when it came out, since I had played the first one with few problems. But unfortunately, for some odd reason, the QTEs were much faster and in an effort to make the game bigger, developer Rocksteady had added more puzzles that required extremely precise timing and twitch reactions. It wasn’t so much that there were more barriers that I had a problem with. It was that the barriers that were there (that were the same as the original game) had gotten harder. The QTEs were faster, the controls were more finicky, etc. But that said, I still made it halfway through the game with some help and would have beaten it had I not been distracted by another new release at the time. The newest title, Batman: Arkham Origins, continues this alarming trend toward inaccessibility to such a point that within 15 minutes of sticking the game into my PS3, I had encountered a QTE that was so fast that no matter how many times I tried, I couldn’t get past it. To make matters worse, these were the same QTEs that I had had no problem with in previous Batman Arkham titles. But for some reason, the developer had chosen to speed them up to a point where I couldn’t cope. As a result, I watched my interest in what had original started as one of the favorite series of this generation turn into disgust over a game that I just couldn’t play.

Before I was an even-handed reviewer of video games, and even before I was a Sony fanboy, I was an unapologetic Nintendo devotee. I grew up on games like the Legend of Zelda: Majora’s Mask and SuperMario 64. My console of choice last generation was the Game Cube. Yet, at the end of last generation, Nintendo took an alarming turn when they announced their fully-motion-controlled system, the Nintendo Wii. I tried it and quickly realized that the hardware was completely inaccessible due to my shaking limbs and lack of fine motor precision. I was then confronted with the fact that all of the games that I had grown up with were suddenly off-limits to me, including (to my shock) Zelda: Skyward Sword, which didn’t even offer the option for a standard controller. Now thankfully, with the Wii U, Nintendo has seemed to make allowance for players who can’t handle motion control. But that doesn’t change the fact that building a system that inherently excludes gamers like me with fine motor disabilities will remain my biggest disappointment of this generation.