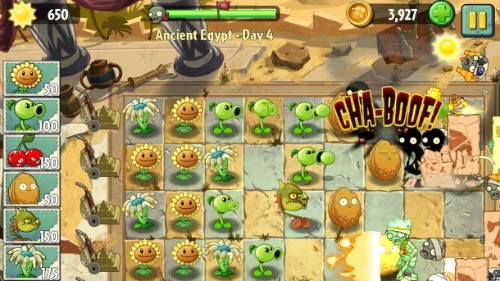 Well, the sequel to the title that defined mobile gaming for many consumers is finally here—and it’s about time, literally. Thankfully, this week’s mobile spotlight highlights a highly anticipated game that anybody should be able to play, regardless of disability.

Plants vs. Zombies 2: It’s About Time

The original Plants vs. Zombies was highly accessible. Thankfully, so is its sequel. For starters, this game can be played with your mobile device muted—sound is purely an add-on. Even the dialogue is communicated in speech bubbles, and the characters who talk simply babble incoherently similar to the way Sims talk. The game does do some interesting things with color, but color alone is not used to communicate much in the game. For example, there is a new type of Zombie enemy that appears earlier in the game. The Zombie Pharaoh can suck up the rays of sunshine that players use to plant their army of Pea Shooters, Wall Nuts, and other Plant soldiers. When the Pharaoh sucks up the rays, they turn from yellow to red. But since they also start moving horizontally instead of vertically on the screen, the inability to see color would not be a detriment to players. Similarly, there are Plant soldiers that look the same except for a color difference, but because each one has a unique name and vastly different abilities, it should always be easy to tell them apart. Combine that with PvZ’s signature art style and this game is very accessible for players with all types of visual impairments. Players with fine motor disabilities may struggle with this game, but only slightly, since there is a small amount of precision needed. Quickly moving your finger around the screen is not a necessity but does make the game easier. But the fact that Plants vs. Zombies 2 is free means that if a player downloads this game and can’t play it, it represents no gamble for them. That is perhaps the most accessible feature of Plants vs. Zombies 2.