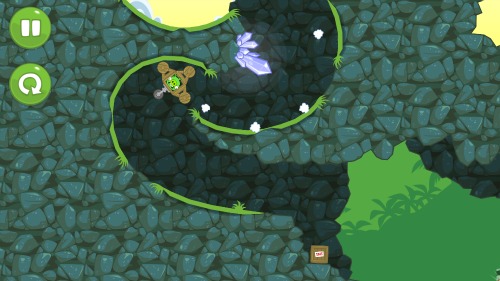 Do you hate those Angry Birds? Think they’re arrogant and territorial? Then why not teach them a lesson in Rovio’s new spin-off game, Bad Piggies. In addition to being downright addictive, this game is completely accessible, no matter what a player’s physical disability. To begin with, this game does not rely at all on sound, making it accessible for players with hearing disabilities. And it also features that signature Angry Birds art style, which means that all of the important features are very distinct from one another. This means that poor vision also won’t be a barrier to the enjoyment of this game. But what’s truly impressive is how accessible Bad Piggies is for players with fine motor disabilities. The object of the game is to build a cart and then propel that cart through a variety of levels, with the end goal of collecting an item at the end of each level. As a result, the game has very few time constraints and allows the players to experiment with any design possibility before actually starting the course. To be clear, each level takes place in two stages. First, you build your cart, and then you make it roll down the track—kind of like the Pinewood Derby when you were a kid. There may be some levels where a player is required to adjust their course, but the controls are so simple that this shouldn’t be a barrier as long as a player is using an accessible smartphone or tablet.

Royal revolt is an old-school tower defense game that plays well on iPad or iPhone. The player only controls the prince. Everything else is done by tapping on the screen and watching the action unfold before you. If a soldier is spawned, he will immediately run down the map and start attacking the tower. Your job is to spawn large groups of soldiers to keep the pressure up and ultimately destroy the castle at the end of each level. The simplistic controls mean that players with fine motor disabilities will not have a problem as long as they can cope with the size issues that come from playing this game on a smartphone, since as a result of the small interface some of the buttons are very close together, requiring a lot of precision. But if playing this game on a tablet, this should not be an issue. The game lacks any sound that would bar a hearing disabled player from enjoying it. The cartoony art style also makes it easier to distinguish between types of units. On the whole, Royal Revolt is a great example of a barrier free iOS game.