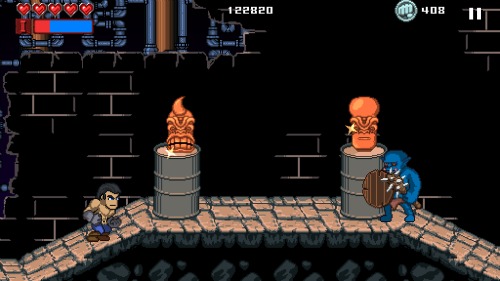 Apparently, we are embracing our inner Rocky Balboas at DAGERS this week, because both of the games we found to highlight have a distinct boxing theme. And they both show how arcade style action games can be made accessible on mobile devices.

Punch Quest has all the nostalgia of an old NES game without the hassle of having to blow up the cartridge before you play it. The classic pixelated graphics and midi music add flavor to this game that is both great fun and should be relatively easy for any player, no matter what their disability. Sound is never an issue with Punch Quest, making it extremely accessible for those with hearing disabilities. And because of the pixelated art style, the same can be said for players with sight disabilities. Finally, since the main goal of Punch Quest is to use your fists to plow through hordes of enemies while your character is making a headlong charge through various platforming levels, it is refreshing to see that this game features such simple controls. Moving the character is done automatically. All the player is responsible for is uppercutting and jabbing the various monsters that pop up as the character moves through the level. As a result, the game interface only features two buttons, which are spaced far enough apart, so anybody who is able to access iPhone hardware should be able to play this game.

Students of old school gaming will no doubt remember the maniacally hard Mike Tyson’s Punch Out. Easy 8 Software has brought the spirit of this game to iPad and Android. The player plays as an up and coming boxer, who works his way through various fight circuits to become a true contender. And just like the ‘80s game which Pocket Boxing pays homage to, the player must use speed and agility to fight his way through a string of massive opponents. However, this game features controls that are so forgiving that even if a player has severe fine motor limitations, if they can access either a smartphone or tablet, they should be able to control this game, since the controls are simply zones on the screen which are large enough to require little precision. Even better is the fact that, like most mobile games, sound does not affect the gameplay. And players with sight disabilities should have little problem with this game, because of its straightforward presentation and high level of contrast.

Publisher: Easy 8 Software
Platform: iOS, Android
Price: Up to $1.99, depending upon platform and version