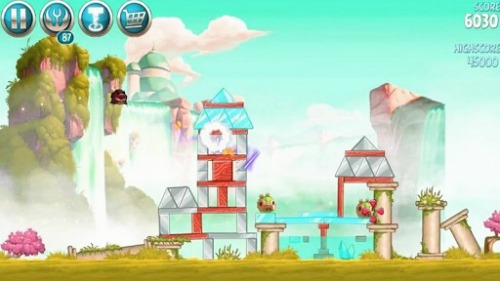 This week’s Mobile Spotlight highlights the next title in a long line of wildly popular mobile games. But is it accessible?

Angry Birds Star Wars II covers everything the original Angry Birds Star Wars didn’t, namely, the prequel trilogy: The Phantom Menace, The Clone Wars, and The Revenge of the Sith. It follows the same tried and true formula, but it’s probably not as accessible as other iterations of Angry Birds. This is because developer Rovio has included special abilities that rely on pinpoint accuracy and timing. While there were always these elements in previous Angry Birds games, both Angry Birds Star Wars games suffer from a preponderance of these difficulties because of their compulsion to include birds that swing light sabers and piggies that launch missiles. And while it is true that this game is considered somewhat easier than other Angry Birds titles, its reliance on accuracy and timing may cause fine motor disabled gamers to shy away from it. Gamers with hearing disabilities, however, will have no problem with this title, since nothing relies on sound, and the game’s soundtrack features only the ubiquitous Star Wars sound effects and John Williams’ classic scores, which add nothing to the gameplay. Gamers with sight disabilities will probably need to be careful with this title, since, unlike the original Angry Birds, this title uses more fine detail and color to differentiate between bird types. Players will have to be able to determine which of their tiny minions are wearing robes and which of their tiny minions feature Mark Hammel-esque hair if they hope to get anywhere. One of the biggest new features of this title is a tie-in with Hasbro’s Angry Birds Star Wars figurines, which allow players extra power-ups for purchasing Hasbro toys. Even though this may sound annoying because it adds a substantial financial component to a free mobile game, I found no need to use these extra power-ups during the whole of the play through for this review.