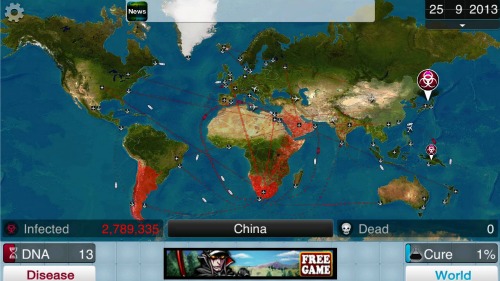 For this week’s Mobile Spotlight, we have a single game that illustrates the right way to make strategy games accessible on mobile devices. We hope you find it as infectiously fun as we did.

While the premise is somewhat dubious, Plague Inc. illustrates perfectly how real-time strategy games can be made accessible on mobile devices. The basic premise is this: the player plays as a disease bent on world infection and, eventually, domination. First, select a country to begin in and then slowly mutate and spread using DNA points earned through infecting more and more people. Become severe enough, and the governments of the world will try to stop the plague. But this is an all-out fight for survival. The player can use all of the tools in their germy arsenal to become a pandemic. The game features a map interface for its main screen, which allows the player to tap on countries and regions to view important statistics in order to decide what mutation to invest in next to make the disease as infective as possible. Because of this, not much fine-motor accuracy is needed. And even though there are some power-ups that appear on the map that disappear after a certain time limit, the time frame is generous enough that the game does not rely on having quick reflexes. In addition, the game features good contrast in all areas. Anything that is communicated by color is also communicated by a symbol as well. For instance, as a germ the players will want to pop any blue “cure” bubbles that pop up, because, if left un-popped, progress toward the cure will be greatly sped up. There are also orange bubbles that give you extra DNA points to spend. But both of these have very distinct symbols, so even if a player can’t see the difference between the colors, they will still be able to differentiate between the two types of bubbles, because of their symbols. As usual, developer Ndemic only uses sound to enhance the game. There are no features that rely solely on sound. This game is basically a dynamic disease simulation, allowing the player to try dozens of combinations of symptoms, defenses, and methods of transmission in order to determine the best way for the disease to thrive and eventually wipe out humanity.