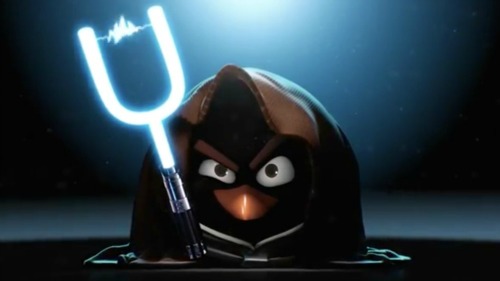 This week saw the release of the next in the series of wildly popular Angry Birds games. Angry Birds Star Wars follows in its predecessors footsteps by being both incredibly fun and very accessible.

To begin with, the controls are very simple and can be operated by one finger. And while the Angry Birds are small, requiring some precision to pull them back and launch them, the game seems forgiving enough that this shouldn’t be much of a hindrance. Furthermore, all of the Angry Birds characters have received a Star Wars style make over, making it even easier to tell the distinct birds apart even if a player cannot see fine detail. Finally, like its predecessors, Angry Birds Star Wars does not rely at all on sound and simply uses a spiffied up version of the original Star Wars theme to accompany the gameplay.

But all of this doesn’t do the game justice. It’s incredibly fun taking the Angry Birds mechanics you know and adding signature Star Wars elements such as light sabers and force powers. This adds a whole new dimension to the gameplay, which does require a bit of precise timing. For example, the basic red Angry Bird takes on the character of Luke Skywalker and is given a light saber part way through the game. Players can tap the screen while the bird is in flight, making him swing his light saber and destroy any obstacles that are in front of him. But given that this game encourages a trial and error approach and that the timing windows seem to be very generous, any player no matter what their disability should be able to enjoy Angry Birds Star Wars.