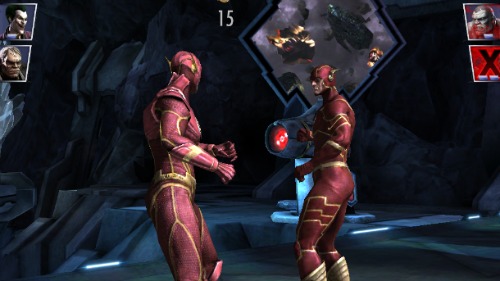 For this week’s Mobile Spotlight, we tackle another big name game tie in, this time from Warner Bros. Entertainment for iOS.

Injustice: Gods Among Us

Warner Bros. Entertainment has released a mobile app to go along with its blockbuster fighting game, Injustice: Gods Among Us. Unfortunately, although fun to play and critical if players want to unlock all of the alternate character skins within the console version, the app is not nearly as accessible as its big brother. This does not stem mainly from any design choices Warner Bros. has made, but simply from the constraints of putting a game like this on mobile.

The good news is that players with sight disabilities actually may find this app more accessible in some ways than the console version. In this app, unlike the console game, players aren’t free to move on the screen. As a result, even when a player is playing a mirror match with the exact same character, it is still easy to tell which one is the enemy, because the player is always on the left side of the screen. And because of the way the camera is positioned, everything important is easily distinguished.

Players with hearing disabilities will have the same problem they have with the larger Injustice game: a lack of subtitles in the in-match banter and the opening cinematics. And since those are the only occasions the characters have to talk, there are no subtitles whatsoever in this mobile game. However, this is the only problem they will face, and so the game might still be worth a look, especially if you own a tablet.

The biggest challenge will be faced by those with fine motor disabilities, since this mobile game has all the timing requirements of the original Injustice: Gods Among Us without a nicely laid out fight stick—or even a standard controller—to make attacking and blocking easier. Players will have to keep tapping and swiping their iPad and iPhone screens continually to attack, and they will have to drag two fingers quickly down the screen if they want to block. As a result, even though the opening matches of this title are relatively easy even with a fine motor impairment, most disabled players will run into a difficulty wall pretty quickly after downloading the app.

The real disappointment is that you have to play this game and do well at it if you want to download the costumes without paying a ridiculous amount of money to buy them via microtransaction. As a result, it feels like Warner Bros. unwittingly excluded a lot of disabled players form being able to enjoy the full experience of the console version of Injustice, because it is so closely tied to the mobile version.