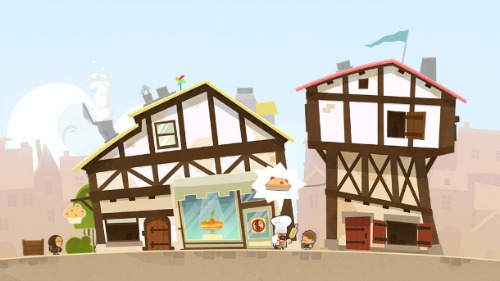 It’s been a while since we’ve done a mobile spotlight, but we’ve got a good one for you this week. It’s a stealth-based puzzle game that both Apple and Android users can enjoy—and which happens to be fairly accessible.

This latest title from Rovio Stars places players in the adorable hooded smock of the title character, Tiny Thief, a Robin Hood type fella who steals things from the evil politicians that oppress the kindly village folk. The gameplay is tap based, which means that it will be easier for gamers with fine motor disabilities to play on a tablet. But the gameplay is forgiving enough that playing on a smartphone is by no means off limits. Players tap to guide the Thief though each level and to make him interact with objects. For example, one level tasks players with stealing successively bigger cakes from a local baker. To do this, players have to tap around the environment until they find the right tools to lure the baker out of his shop three times, so that the Thief can sneak in while he is gone and steal the cakes. The other nice thing about Tiny Thief is that nothing seems to be communicated in sound (or even much text, for that matter). The gameplay is so intuitive that it needs little explanation, and what explanation is necessary is communicated by Rovio’s trademark static cartoon instructions. The only gamers that might struggle a little bit are those with sight disabilities. Although the game features an overstated cartoony art style, there are certain objectives which do require the ability to see small objects on the screen. However, most of these were secondary objectives that didn’t hinder progression in the game. Furthermore, even though these elements are small, their distinctive look may be enough to help visually disabled gamers overcome their small size. On the whole, Tiny Thief is definitely worth a look. Its stealth-based pacing and forgiving gameplay make it a must play for players with fine motor disabilities. Its lack of sound means that hearing impaired players will enjoy it, and its incredibly charming visuals make it easy for most visually disabled gamers. For $2.99, it’s a steal!