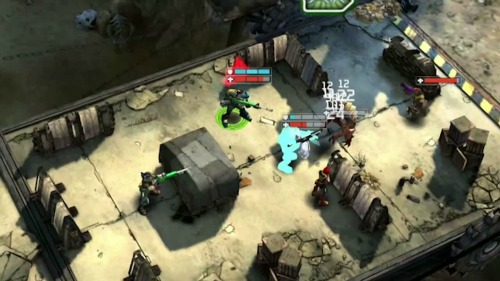 For this week’s Mobile Spotlight we take a look at a game that is tied into one of the most popular franchises of this generation.

2K Games excited gamers when they announced that they would be releasing a mobile game to tie into the popular Borderlands franchise. Unfortunately, for disabled gamers the Borderlands name might not be worth the hassle of playing this isometric shooter. Gamers with hearing disabilities are perhaps the only ones that will be able to enjoy this game to its fullest since there’s nothing within the game that relies on sound of any kind. Players control a squad made up of all four characters from the original Borderlands, each with their own abilities and skill trees that can be unlocked as they gain experience. Every level tasks the player with surviving wave after wave of skags and other enemies found on Pandora. Each character is controlled individually and can be leveled up and customized in ways familiar to Borderlands players. However, if a gamer has a sight disability they can count on struggling with this game, since the point of view is centered high above the characters heads, making it extremely hard to distinguish vital details such as which character is selected or when enemies drop collectible loot. It gets even harder to play when players aren’t exactly sure where things are happening on the map. For example, when Roland activates his special ability, it can be very hard to figure out where he actually put the turret on the map, since most of the time all four characters are crowded together, and it is difficult to distinguish detail. Borderlands Legends also relies solely on color to communicate which items are rare. The game is also hard to control for those with fine motor disabilities since players have to be particularly accurate when maneuvering such tiny units. To compound matters, the game doesn’t seem very responsive. As a result, players will have to tap the screen repeatedly to get the characters to move and attack. Borderlands Legends sounds like a good idea on paper, but for disabled gamers at least, five dollars can get you a more accessible game.