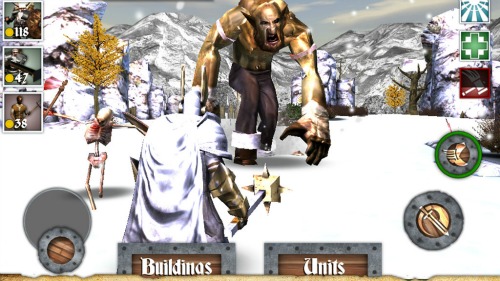 This week’s Mobile Spotlight focuses on a third person hack-and-slash game for the iOS that is both difficult and incredibly fun.

This third person hack-and-slash tower defense pulls players in with solid gameplay and a cheap price. Heroes and Castle has only one goal: survive. At the beginning of the game, players choose one of three classes: the sharpshooting dwarf, the speedy paladin, or the stalwart knight. Throughout the rest of the game, players will be hacking their way through hordes of skeleton warriors while simultaneously recruiting units into their army to come join the on-screen battle and upgrading the castle they are trying to protect. Players with hearing disabilities will be able to enjoy this game because, like most mobile games, there is no reliance on sound, since even the alarm notifications (such as, “Our castle is under attack!”) are displayed using text as well. Players with sight disabilities will be able to enjoy this game because the art style is such that players are placed directly in the action. For example, when you need to deal with a massive giant, it is pretty obvious: he will be barreling towards you, filling up the screen, giving you the perspective of the heroic knight about to get squashed under his feet. The only players that will struggle with this game are those with fine motor disabilities, since it requires the use of both hands. It is easiest to play when the player doesn’t have to focus on holding the device and playing at the same time. However, even though Heroes and Castles is difficult at times, it is still incredibly fun, and for $1.99 it is worth a look for anyone interested in an action-RPG on mobile.