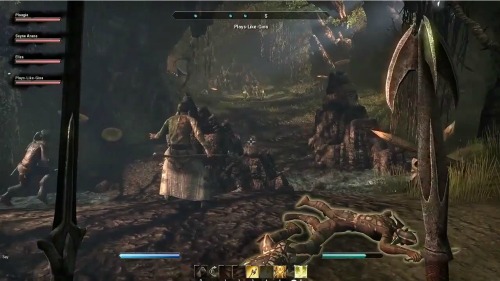 MMO’s are some of the most widely played games in the industry. The challenge with reviewing them is that they are constantly being updated, because of this, DAGERS is starting a new series of articles to give players accessibility impressions on gaming’s top new MMO’s as they come out. Rather than a concrete score that may be out of date, the next time the game gets updated we will be providing a dynamic set of impressions that will be updated and rereleased whenever important changes are made that affect the game’s accessibility. Let’s take a look at the first game to receive this treatment: The Elder Scrolls Online.

The Elder Scrolls Online is a mixed bag for most disabled gamers as far as accessibility goes, there are some features that would make it the most accessible current MMO if not for some very hard and unforgiving barriers.

For gamers with visual disabilities, The Elder Scrolls Online eliminates many barriers present in the MMO genre by using NPC speech to communicate storyline’s and quests, rather than solid blocks of text. This is a good thing, because the text that is in the Elder Scrolls Online can be small and hard to read, given that it’s white text on a transparent black background. Furthermore, the game does feature a color coding system for rare items, and items that the player cannot use. However, all of the information communicated by color coding is also communicated in the text, so as long as the player can read the item descriptions in ESO, they shouldn’t run the risk of wasting money on unusable equipment.

Speaking of money, another barrier for all disabled gamers is that there is no free trial for The Elder Scrolls Online. It is true that when you buy the game, it does come with a free month of game time, but Bethesda requires players to sign up for a paid subscription before being allowed access to their free month.

When it comes to visual accessibility, the other issue that players will run into is that ESO like many other MMO’s relies on tiny icon’s to execute special attacks and maneuvers. Combine this with the small chat window and one can see how a visual disability may seriously inhibit a players ability to enjoy the entire game, yet as other MMO’s like Star Wars: The Old Republic have proven, it is possible to make the elements of the players HUD adjustable both in location and size, which can make them easier to see, but as of yet, this feature does not exist in the Elder Scrolls Online.

From the standpoint of fine-motor disabilities, ESO is the easiest to control MMO that I have ever played. This is because it plays a lot like any other Elder Scrolls game, and doesn’t have an auto attack feature, or other complicated mechanic’s that may pose barriers in MMO’s. Players don’t even have to worry about special abilities if they can buff their character using passive abilities and equipment. On the other hand, The Elder Scrolls Online is extremely unforgiving, especially when compared to the Godfather of all MMO’s, World of Warcraft. The last time I played WoW, when players died they had the option to respawn exactly where they had dropped. Every time they would do this the cooldown timer would get longer, eventually becoming more time consuming than returning to a waypoint and retreading the same ground. However, in ESO players need Soul Gem’s to respawn where they drop. I have not found out where to buy them as of yet in Ebonheart. As a result, players who don’t have Soul Gem’s will spend a lot of time retreading the same ground in ESO’s massive world. The other issue is that players take a penalty every time they die that affects the durability of their weapons and armors. As a result if a player is stuck on a particularly hard boss, they may be at risk of completely losing their armor and weapons if they die repeatedly which will only make it easier to keep on dying.

For players with auditory disabilities, the game is probably least accessible. While it is true that all of the story and quest dialogue is somehow presented in text, there are no subtitles for ambient dialogue, and even when NPC’s say something that isn’t part of a longer conversation, deaf and hard-of-hearing players are going to miss it. To make matters worse, the text that is there suffers from Godzilla Syndrome, where what is actually being said doesn’t match up with what’s being displayed on screen. This seems like a sloppy oversight on behalf of Bethesda, but it means that players with hearing disabilities may not get the same story from a quest as their friends who can hear.

As a whole, ESO is not completely unplayable for disabled gamers, but neither is it where it needs to be. If you have a sight or fine-motor disability, the game will represent only some classic struggles common to the MMO genre, but gamers with hearing disabilities will have more of a problem because of the inconsistent voice-to-text transcription and lack of subtitles.