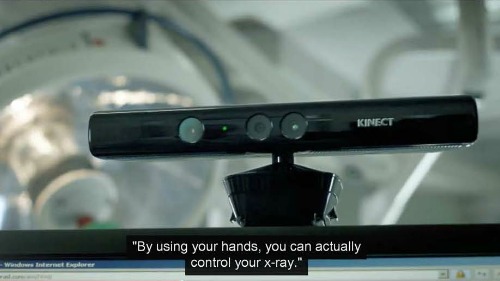 The commercial highlights technologies that uses Microsoft products, but not exclusively, to impact lives especially by meeting disability related needs.

The commercial stars Steve Gleason, a former professional football player who was diagnosed with amyotrophic lateral sclerosis (ALS) in 2011. In a separate video viewable here, Mr. Gleason describes the symptoms of ALS as “A person loses the ability to move and breathe on their own, I communicate verbally with eye tracking technology.” Following Mr. Gleason’s diagnosis he founded Team Gleason which raises awareness of ALS and helps others with ALS. Microsoft’s commercial features Mr. Gleason using Tobii’s EyeMobile, eye tracking hardware, in conjunction with a Surface for computer use. Additionally, Mr. Gleason narrates the commercial with text to speech voiceover technology.

Other technology shown includes Braylon O’Neill who uses two leg prosthesis’ and the Microsoft software that monitors his gait mechanics for informing his prosthetics’ alignment. Surgeons manipulate x-rays via hand motions with the Kinect during surgery rather than scrubbing out of surgery. Hal Lasko lost his eyesight and uses computers for painting by enlarging his pieces to the magnitude that he requires for digital painting. Sarah Churman used hearing aids. Shown is the moment of activating her cochlear implant and her emotional response to hearing for the first which was previously a viral YouTube video. Microsoft technology is the platform for her Esteem Implant used by Shohet Ear Associates and developed by Envoy Medical Corporation.

The Microsoft commercial is available here and the extended videos are available here.  All of the video content as linked to YouTube is closed captioned.

At DAGERS, we recognize the sensitive nature of depicting disability in mainstream media. Disability is an all-encompassing term that we often do not use to refer to ourselves. We understand that living with a disability is not necessarily “inspiring” because we are simply living our lives. Microsoft’s commercial is for mainstream consumption which requires distilling the complexities of disability related needs into a minute long highlight of available technologies for increased public awareness.

DAGERS mission is to report video game news with a perspective on video game accessibility that brings the discussion of disability in gaming into the day to day conversation rather than an occasional “inspiring” feature. We appreciate Microsoft’s efforts to bring disability related technology to the forefront during a nationally celebrated event that was watched by millions.