Microsoft Increases Cable Content On Xbox 360 And Xbox One 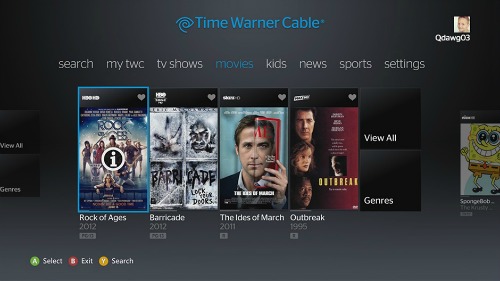 Microsoft has expanded Time Warner Cable services on the Xbox 360 and added cable content via Verizon FiOS on the Xbox One. Microsoft’s support of the Xbox consoles as overall multimedia devices is clear with the cable apps that ultimately strive to fully integrate cable television within the Xbox consoles.

Note, that use of the Time Warner Cable and Verizon FiOS apps requires a subscription to both Xbox Live Gold and to the applicable cable company.

In August 2013, Xbox 360 launched the Time Warner Cable TV app that gave cable access via the Xbox 360 for live programming on almost 300 channels. The Xbox 360 app is now upgraded to include Video On Demand. The Kinect for Xbox 360 continues to allow for voice and motion controls rather than navigating the menus with a remote. The app’s update also added a “share” feature that enables in-app messaging, such as while channel surfing. While the messaging function is limited to app users, the feature is a step towards the simultaneous use of gaming and television.

In a recent survey, the FiOS Innovation Index, almost two-thirds of 900 consumers surveyed expressed a desire to watch streamed video on their gaming console. Thus, the Verizon FiOS TV app was created. The Verizon FiOS TV app is now available on the Xbox One with 74 available channels of live television. Again, Kinect for Xbox One allows for voice and motion controls while watching television.

With the Xbox One snap function, two television shows, such as two live football games, can play simultaneously. One show is passed through the HDMI connection from the Verizon FiOS cable box and the second show is streamed via the Verizon FiOS TV app.

Microsoft abundantly supports the Xbox consoles functioning as all-in-one multimedia devices. Minimizing steps required to switch between television and gaming is a potentially accessible set up for disabled gamers by allowing less menu navigation and less hardware handling. However, the Kinect’s voice and/or motion controls are not accessible for all disabled gamers. For full accessibility, Microsoft needs to provide a controller navigation scheme with the same ease in mind that is the basis of the Kinect’s user interface.

A common complaint with the new Xbox One is the lack of On-Demand cable access. The introduction of the feature on the Xbox 360 first will be an interesting test run. Integrating television and gaming for simultaneous use provides less barriers for disabled gamers to instantaneously switch between entertainment mediums. Hopefully an ongoing conversation will mitigate unexpected inaccessibility within new features and the loss of accessibility features that is common with new technology.