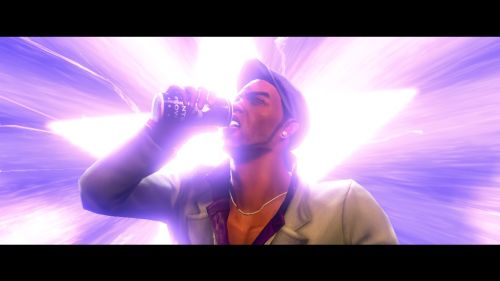 It’s time for yet another weekly freebie, and with last week’s focus on Tekken, I was tempted go try out SoulCalibur, but opted to cover Saints Row since it’s only free for a limited time. From now until May 31, Xbox Live Gold members will be able to download the game completely free of charge.

It’s a fairly large download sinice it’s a full Games on Demand title, so you’ll want to free up some hard drive space to make sure you can play it. The third adventue is easily my favorite of the series yet, with its rough edges gameplay-wise largely smoothed out here and the whole scope of things has been increased. The Saints have now gone from being just a gang to being a major media empire, and the missions have been upscaled to reflect that. Instead of simple robbery, the game BEGINS with a giant bank heist that leads to arena-style shootouts, fighting on a plane, and mid-air gunfire. This is all in mission one, folks – it’s crazy!

Stillwater isn’t the setting this time. Instead, the steel city of Steelport is used and you get a whole new set of wacky characters – including a Hulk Hogan-voiced ex-wrestler and Rob Van Dam as a DJ. There factions rule the city, with Hogan’s ex-partner running one gang, a hacker fanboy named Matt Miller running another, and a tech company the leader of the Syndicate Phillpe Loren. This gives you a set series of goals to accomplish as a whole, but breaks things down into a more traditional mission structure with each set of bosses giving you a new style of gameplay. Most are about what you could expect before, while Matt Miller’s missions are a riot. He’s a tech geek and gets you into some TRON-style stages with homages to gaming’s past thrown in with your weaponry, and pure goofball sections that will have you laughing a lot. This third installment finds just hte right mix of serious and silly, unlike the fourth game, and works as a fine launching point since the whole “they’re a street gang gone big time” story is told quickly and the narrative of the first two games wasn’t much to write home about anyway.

This game certainly shows its age visually, but looks fairly solid now. It’s not a jaw-dropper like GTA V is, but nice lighting effects at night help it out a lot. Neon lighting is used fairly well, and not overused like the fourth game. Car models are reasonably-detailed, and the scale of buildings is impressive. They look gigantic and should, and while character models are a bit shoddy, everything else looks pretty good. Disability-wise, the large icons make things easy to see. During missions, you get a clear marker of where to go both on the road and on-foot. Driving gives you a very clear corner GPS with a bright green arrow marker giving you turn-by-turn directions. On-foot, you get a giant colored arrow showing you where to go and how far you are from your target area. The series ways always friendly for folks with navigation issues before on the road, but this was the first game to offer up so much help on-foot and it’s a godsend. There’s also the use of nice, bright button prompts for QTE sections and that’s far better on the 360 than on the PS3 with much brighter button prompts since the colors are more bold and easier to see.

At the end of the day, Saints Row the Third is still an excellent sandbox game that you should check out if you haven’t done so already. It really serves as a time capsule to early-decade pop culture with a ton of dubstep and audio filters used on things, and has aged nicely so far since those things are still relevant today. If you’ve never tried a Saints Row game, you can jump in here and not lose much wtih the story. Anyone with Xbox Live Gold should give this a download if they haven’t done so already since it never hurts to have a digital backup of something, and you can’t beat getting one for free. Saints Row IV might seem like a better choice for a free game, but it really isn’t since this is so much better than it in every meaningful way. It’s got a reasonably-compelling storyline and far more enjoyable characters in both quantity and quality than SR IV. So far, it’s the best entry in the series and one of the best sandbox games on the market today.