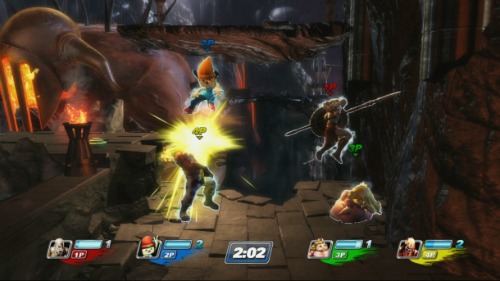 With premium programs like PlayStation Plus and Xbox Live Gold, gamers are given the option of downloading high quality titles for free as a perk of the subscription. Although some of these titles are older, they are definitely worth review. So we are inaugurating a new feature that highlights free game downloads and looks at their accessibility.

This month, if you are a PlayStation Plus member, you can download their franchise mash-up arena fighter for free. I’ve put many hours on the paid version of this game, and it’s an enjoyable smash fest that’s easy to pick up and put down. Unlike other games in the genre, the characters in Battle Royale all feel different and have distinct play styles. As a result, players will be able to experiment and find a specific play style that is right for them and is unique to an individual character. This means that if a player with a fine motor disability has trouble with the up close and personal fighting style of a character like Raiden from Metal Gear, they can pick a long range sniper like Colonel Radec who can hit enemies from across the map.

The game is probably a good match for most gamers with fine motor disabilities since it only relies on the face buttons, and the control scheme seems to be simpler than other arena fighters. Unfortunately, however, gamers with visual disabilities will still struggle since each battle constantly zooms in and out to give players the best view of all four participants. Also, since performing supers are the only way to score points in this game, visually impaired players need to be careful which players they pick since some supers turn characters invisible, and others make opponent characters seem really tiny.

There is only one area where players with hearing disabilities will be at a disadvantage: the Little Big Planet stage. Halfway through the battle, the Little Big Planet stage turns into a stage honoring the game Buzz!, in which players are quizzed while fighting and have to stand on a platform displaying the right answer in order to avoid being damaged. As a result, players will have to be able to hear the announcer ask the question if they hope to avoid this pitfall. But there are no subtitles in-match, which means that hearing impaired players (if they get this game) should do their best to avoid this stage.

On the whole, PlayStation All-Stars is a reasonably fun and accessible game and is definitely worth the free download on PlayStation Plus this month.