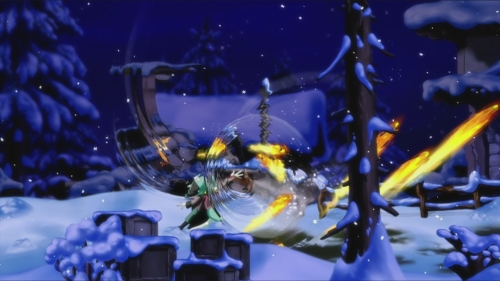 It’s been nearly two years since Dust: An Elysian Tail first hit the Xbox Live marketplace. Now, thanks to Microsoft’s Games With Gold promotion, it’s free of charge for Gold account holders until May 14. The game’s development is inspiring for everyone since it was largely done by one man – Dean Dodrill. He crafted the game’s vision, most of its story and handled the programming and animation. Bold colors and lush animation make this an easy game to see for those with low vision, while a color blind mode is built right into the pause menu. This is a fairly common thing for PC games, but isn’t usually done for console games. Dust is one of the very few games that manages to be friendly to those with disabilities without making a big deal of it – it’s simply very accessible.

Bright colors make it easy to tell what everything in the game’s world is, while bold colors help those with vision issues as the giant white text on a black background is very easy to read. The rich soundtrack, muli-layered sound effects, and surprisingly good voice acting for an indie game can be appreciated easily if you don’t have hearing problems. If you do, then the large black text boxes with large white text make it very easy to at least appreciate the game’s writing. The dialogue is amongst the easiest to read in a game, and the large text is readable even on a fairly small screen. The latter point is very noteworthy since the last generation of gaming has been plagued with text that was nearly impossible to read on a large HDTV, let alone a small one.

As far as the game itself goes, it’s an excellent platformer/beat-em-up/action RPG hybrid that manages to combine all of those genres fairly seamlessly. Despite doing so many things, it doesn’t rely on the crutch of using the d-pad for secondary actions. Instead, both the d-pad and left thumb stick can be used to move around. The end result is a more comfortable control setup since you can move slightly easier with motor problems using the stick than the cumbersome d-pad of the original 360 controllers. The overall gameplay is nice and tight, with everything working exactly as it should. Hand to hand combat is smooth using the X button, while Y using a wacky wind attack that you can combine with the regular combat. Long-range stuff can be done with your little fox helper pressng B to send little bullets of light everywhere to not only do damage – but keep a combo alive as well. The blending of action with magic helps the game avoid the beat-em-up problem of getting old quickly, although those with arthritis or joint pain will probably want to minimize their play sessions since it can still be a taxing game on the joints since you will still be hitting the X button a lot.

If you’ve got an Xbox Live Gold account, you owe it to yourself to give Dust: An Elysian Tail a shot. It’s one of the better platformers on the 360 and has enough action RPG stuff in there to satisfy players of that genre too. In a lot of ways, it’s like the recent Ubisoft release Child of Light, just with anthropomorphic character designs. It’s a very disability-friendly game, although those with motor issues will likely have trouble with the repetitive button pressing. Aside from that though, this is a highly-accessible game. Beyond that, it’s one of the most polished efforts on the Xbox Live Arcade service. It was a must-buy before, and at free, there’s no reason to avoid checking it out.