Lords Of Xulima With 15 Days Left Of Crowdfunding 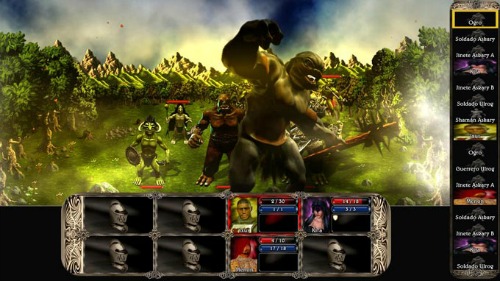 Numantian Games is crowdsourcing their current game in development, Lords Of Xulima, on Indiegogo.

The turn based title is advertised as an old school RPG that is inspired by classics such as Ultima and Might & Magic. Customization is centered on strategic battle tactics that are required for success in turn based combat. Parties with up to 8 members feature 9 character classes along with 18 weapon classes with 20 qualities each and 100 enchantments that can be combined for special combat moves unique to each character class. The traditional turn based combat is a face to face square off with the player’s party and the enemy horde arranged in two lines, front and rear, with each character’s location in the party’s battlefield lineup impacting combat options.

The tiered contribution options range from $5 warranting a thank you, a high resolution wall paper and the donor’s name noted as a game supporter on the game’s website to $5,000 that results in a full weekend visit with Numantian Games in Madrid, Spain and a special thank you in the game’s credits.

For more information or to support the game visit Lord Of Xulima’s Indiegogo page here.

Turn based combat is traditionally a more accessible combat mechanism than most by providing both time to react while requiring strategy and a wide array of combat options that can be tailored to a gamer’s play style that is largely defined by their disability.

In game text is clear but as a fantasy setting the game footage available shows environments with many gradients of the same color such as forests with many greens and caves with many yellows. The clarity of visual contrast for game functions remains uncertain.

Additionally, the speech in Lords Of Xulima’s trailer is subtitled providing access to following the game’s promotional materials and gameplay footage revealed audio cues provided in text such as, “You hear sounds from devices that move and drag on the floor.” Certainly, the feature is inspired by traditional RPGs but the inclusion of more sound design and voice acting resulted in a move away from text based gameplay that provided accessible gaming to the deaf and hard of hearing/hearing impaired.

For disabled gamers interested in an old-school RPG Lords Of Xulima is a potentially viable choice.