Live From New York City Was The Xbox One 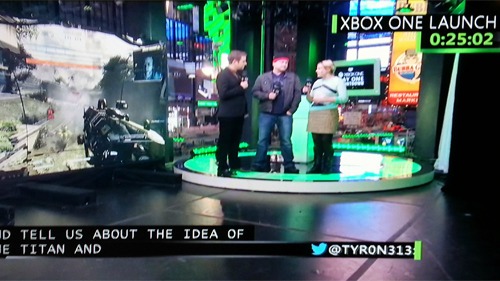 The Xbox One added itself to the console fray last night alongside the Playstation 3 and Wii U in the battle for our living room. The Xbox One launched last night to fanfare, freebies, and long lines.

Sure, early adopters pay for systems that will receive updates for the majority of the next decade but early adopters also pay for the opportunity to be a part of the fuss. Events with other fans allow us to share in our excitement for our favorite hobby that inspires emptying our bank accounts, waiting for hours in the cold, and returning home in the wee hours of the morning to fall asleep while playing our games. Surely, I am not the only gamer to stifle yawns upon returning home with a day one game.

If you were unable to attend a midnight launch event for the Xbox One last night, Microsoft streamed its New York City event in Times Square starting at 11:00 PM EST. The stream counted down to midnight and included performances by the ever-present deadmau5 as well as Macklemore. Ray Cox IV, the gamer behind the well-known gamertag Stallion83, was interviewed in recognition of the highest gamerscore on the Xbox 360, a gamerscore of 952,400. The trip was Stallion83’s first trip to New York City and Larry Hryb, aka Major Nelson, presented him with an impressive Xbox Gold account free for life.

Strongly reminiscent of a New Year’s countdown, lucky gamers counted down the final ten seconds on stage and received their Xbox One consoles amidst raining confetti.  The following morning, aka earlier this morning, Sony returned Microsoft’s gesture at Sony’s Playstation 4 launch last week and congratulated Microsoft on their Xbox One launch.