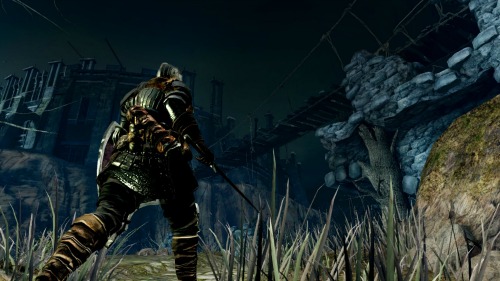 NAMCO BANDAI Games America released a new batch of screenshots for the upcoming Dark Souls II. Dark Souls II will release on March 11, 2014, for the Playstation 3 and the Xbox 360 as well as on PC shortly following the console releases.

Dark Souls II is one of the last big releases that are exclusive to the soon-to-be-previous console generation, but the anticipated title is a good reason for many to keep their previous generation consoles plugged in.

View a few of the new screenshots below.

Red players are a dark spirit invader from the online multiplayer challenging the game’s main player to combat.

White players are cooperative players from the online multiplayer offering assistance with the game’s enemies including online invaders.

The start menu remains as minimal as possible and offers no safe harbor by maintaining gameplay even while accessing the menus.

Soapstone messages remain, but whether the text is a helpful hint or a lie is up to the player to interpret.

The feared difficulty of the Dark Souls franchise interestingly provides new accessibility options. The multiplayer components limit multiplayer interaction by allowing only messages from a pre-written list. Ghost animations also show the actions that led to a previous player’s death. Additionally, communicating between online players occurs nonverbally with only a preset list of animated gestures to choose from for direct communication. The non-verbal multiplayer communication allows deaf and hard of hearing gamers equal access in multiplayer with no need to worry about missing audio cues. Personally as a deaf gamer, I enjoyed this atypical approach to multiplayer. In fact, I tried Dark Souls solely on that premise. Unfortunately, I did not have the time needed to dedicate to the game in order to successfully overcome its infamous combat difficulty.

Due to its difficulty, the combat requires thoughtful strategizing and does not allowing players to progress with button mashing. While the combat is in real time, the required thoughtful approach allows for more strategizing than twitch based gaming for gamers with motor skill disabilities.