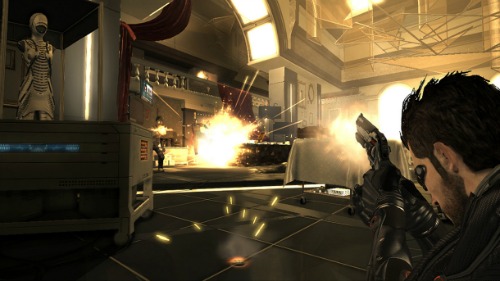 Gamers are holding their breath while the industry gears up for E3 next week. But until then, here’s a free game download that should satisfy any disabled gamer who likes a good story and good action.

This month on PlayStation Plus, members can download Eidos Montreal’s prequel to the cult classic Deus Ex series. It is also available as a free download with some Radeon graphics cards for PC users. Personally, this is one of my favorite games of all time. And although it doesn’t have the graphical polish of a game like Dishonored, it has all the flexibility of play, which makes the game great for players with fine motor impairments, since almost any physical drawback can be compensated through adaptive play styles.

For example, there are multiple paths to nearly every objective, and if you have the PC version, the controls are fully customizable. An extensive upgrade system also allows players to tailor Adam Jensen’s fighting style in dozens of unique ways. As a result, players who have trouble with the twitch timing of first person shooters can gear more toward the stealth angle, giving Jensen the ability silently to take down two enemies standing next to each other. Or, if you prefer a more direct approach, you can choose the Typhoon Augmentation upgrade, which gives Jensen the ability to fire a wave of projectiles from his torso augmentations, decimating any enemies in a wide radius.

Deus Ex: Human Revolution’s one pitfall is in the four major boss fights that players encounter throughout the game. None of these have much in the way of finesse for an option. They are all basic shoot-‘em-up battles. But the game is forgiving enough that with persistence and a little help, anybody can beat it.

But Human Revolution is accessible for more than just players with fine motor disabilities. The story of Deus Ex is one of its finest features, and all of the game’s dialogue is fully subtitled. And even if the guards’ reactions are not, there is an augmentation that allows Adam Jensen to use his radar to see which guards in the area can see him. As a result, this game should provide little barrier to those with a hearing impairment.

The same can be said for those with sight impairments. All of the fine details that matter in the game (such as items Jensen can pick up or doors he can open) are highlighted using a special yellow glow. And since nothing is color coded (everything in the game is saturated with tones of grey or yellow), colorblind gamers and gamers with other visual disabilities should definitely check this game out. It is a sci-fi action shooter with a story that actually keeps you engaged. The best part is, right now it’s free.