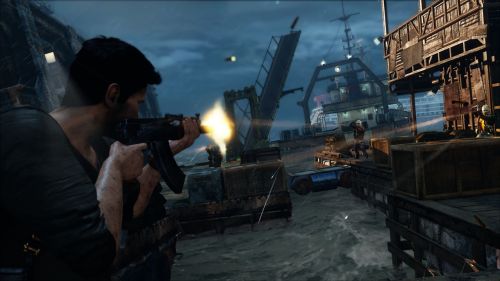 Uncharted 3 is one of the finest games released for the most recent generation of consoles, so it’s a natural choice for the weekly freebie. There will likely be multiple entries this week due to so many things on the PS3, PS4, and 360 becoming limited-time freebies. Uncharted 3 is the one I’m going with first since there’s no time table on just how long it will be free. Sony’s got a big flash sale going on, so there’s a chance it might only be free for a few days as that ends on Friday. It’s also worth noting that this freebie only covers the single-player campaign, as the top-flight multiplayer game has already been made available for free. These portions of the game are each gigantic, so if you don’t have a lot of hard drive space, you might want to search out Gamestop’s Uncharted bundle for $10 – it gets you every PS3 Uncharted game for the same price as an online pass for three would’ve cost when it was new. It may not be free, but it might be a better overall value since you don’t have to download massive files and risk a nasty call from your ISP about downloading too many things in a month and incurring overage charges as a result.

Now, after an entire paragraph of things that loosely involved this game being free, let’s delve into why you should check it out if you haven’t done so already. For one, its’ the best-playing entry in the series to date. Despite being three years old, it still holds up marvelously on a graphical level and it plays the smoothest of any entry as well. The voice acting and music remains some of the best in the business, and subtitles allow those with hearing issues to follow the plot along with ease. The controls are more responsive than ever before, and with a more user-friendly control scheme. While the game does still require some dexterity, it is much easier to do things here than it was in the original UC game, with on-screen prompts for QTEs being a little bit bigger as well. The use of the colored shape buttons helps out a lot compared to something like God of War 3 that has prompts, but makes them black against a single color – making it impossible to tell which button to press just based on the color.

Uncharted 3’s plot isn’t quite as good as UC 2’s, but it has the best sequence in series history with a flashback to Nathan Drake’s younger days. Thanks to the tigher controls, the stealth sections are more fun and the gunplay is the best it’s ever been. Other than some sections with a pirate colony that make no real sense, it’s a blast from beginning to end. The cinematic platforming is also more refined here, even if there are some more contrived sections than before. UC 2 had a train you had to climb that made sense to have a lot of makeshift platforms due to the natural design of a train, while this has something similar with a ship that makes far less since due to that not really having a lot of naturally climbable surfaces. It makes sense visually since everything does fall into place, but it’s still ridiculous to think about when you see just how perfectly things fall into place – it’s kind of like the setup to the finale of the Amazing Spider-Man 1 movie in that regard. If you haven’t played it yet, you owe it to yourself as a gamer to check out UC 3. At no cost without a PS+ membership, it’s the best freebie ever offered up for basic PSN users.