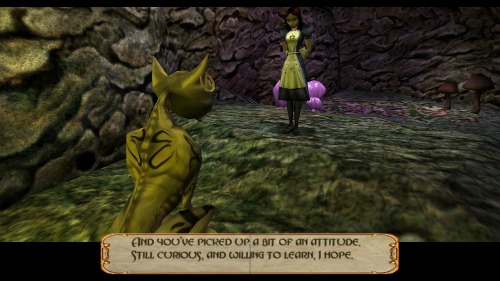 Yes, American McGee’s Alice is a 2000 game that is now 13 years old. The graphics are dated, the controls (at least for the console) are clunky at best, but I turned off the game due to inaccessibility. Subtitles are provided for the in-game dialogue but the cut scenes that propel the narrative are not subtitled leaving me confused at what is said in a franchise known for its clever wordplay. Luckily, this problem does not occur in Alice: Madness Returns.

As a deaf gamer, my hearing loss is in the severe to profound range, and my hearing aids provide me as much access as possible into the hearing world. Video games are my choice of entertainment, and the inclusion of subtitles, preferably captions that include audio cues, are a determining factor of whether or not I can play a game. After all, the hearing do not buy a game with audio that cuts in and out or that does not have audio at all.

My experience with American McGee’s Alice reminded me that oftentimes one game in a franchise sets a precedent that trickles into all ensuing iterations as the franchise template. Franchises remain that, due to past experiences, require extensive research before a purchase. The most egregious faults for poor or lacking subtitles are often years behind us now. Remember that our baseline was no subtitles (or captions) whatsoever after the widespread use of voice acting eliminated subtitles as the default narrative tool. From the model of nothing, we are still playing catch up, because anything was more than what we had. How do these older titles impact my game buying today?

Bethesda: The Trickle Down Effect

The Bethesda games Daggerfall, Oblivion, Fallout 3, and Fallout: New Vegas do not include subtitles in their cut scenes. All of these titles are time sinks that require hundreds of hours in order to experience the game with a marginal amount of time represented in cut scenes. Most notably, the opening cinematic and closing cut scenes are not subtitled. Does it matter?

Of the Bethesda titles listed, I personally only played Fallout 3, which released in 2008. A game’s opening without the option for enabling subtitles or captions is panic inducing. The cinematic plays while I am waiting anxiously and unable to concentrate on the sequence wanting only to know whether or not subtitles are available at all. Once the menus are available, my sigh of relief nowadays for turning on the subtitles is the result of years without even the option of subtitles for many games. In this generation, games I have played that roll the opening cinematic without access into the game’s options (thus requiring a replay for subtitled viewing) range from Spiderman: Shattered Dimensions (2010) to Mass Effect 3 (2012).

In Fallout 3, I accredited the lack of subtitles in the opening as the same scenario, turned on the subtitles, and ascribed the continued missing subtitles in my replay of the cut scene as one bug in a game rife with bugs. So I jumped in. I delved into the game for hours, even obsessing in The Pitt DLC for collecting all 100 steel bars in a mental fist pump of recognition for Pittsburgh. After diverging from the main storyline on side quests and encountering a bug that prevented me from completing the Nuka-Cola Challenge, I returned to the main game, becoming caught up in the story about my father and the nuclear wasteland. As I made the game’s final decisions and the impact of my choices began to flash on the screen as a cut scene, the subtitles suddenly disappeared. My hundred hours of game time solidified into final moments that I could not understand. Yes, by searching the internet long enough I unearthed a kindly forum poster who transcribed the cut scene complete in a flow chart with each ending included. But I was unable to play as a disabled gamer, being required instead to find alternative means for the same access.

The other frustrations I experienced in Fallout 3 became a part of a larger problem. During most of the game, I could not follow the clues and narrative depicted in the audio tapes because the subtitles did not pop up on the screen. By accident, I discovered the text deep within the Pip-Boy menu. The in-game radio provided more than a musical atmosphere when wandering the wasteland by also contextualizing the story of the opposing forces by playing radio shows—that also were not subtitled. Additionally, in a particular quest required to progress in the narrative, a sound puzzle had no audio cues depicted in text. There was an option for moving past that quest by bypassing the puzzle, but that decision required incurring bad karma in my good karma playthrough.

The announcement of The Elder Scrolls Anthology that includes Daggerfall, Morrowind, Oblivion, and Skyrim left me internet searching for whether or not the subtitle concerns are updated or otherwise addressed in the older titles. Such information is not readily available and the most likely answer is no.

Before Halo 3 was available for free on Xbox Live Games with Gold, a friend had loaned me the title. The gravity-defying gameplay against the alien invasion is a favorite genre of mine, and obviously the franchise is widely celebrated in the gaming world. I am not often a melee player, but the Gravity Hammer made me laugh, jumping across the screen at my foes.

My enthusiasm soured as I discovered that the famed relationship between Master Chief and Cortana and even simple game directions were not subtitled. In a reverse of my difficulty with Fallout 3, only the cut scenes were subtitled. In my initial few hours of gaming, I was unaware that the constant onscreen conversations were even occurring until I picked out the occasional word amidst the battle sounds. In my frustration, I turned to the internet which resulted in this being revealed as a common Halo problem stretching to the original Halo, which lacked any subtitles whatsoever.

Halo was a 2001 release on the Xbox that successfully introduced multiplayer to console gaming and is largely attributed to making the Xbox a must have console and a staple brand in gaming. In 2001, voice work in video games was a cutting edge feature in consoles but a byproduct of the new technology was the elimination of previously guaranteed subtitles. Additionally, Halo championed console multiplayer where players spoke to each other via headsets for strategizing or smack talk or both. Live player interaction that fueled gameplay needing the game itself only as a backdrop depended on players verbally communicating with each other. As is common with new technology, accessible features, such as comprehensive subtitles and other communication via text, were left behind.

Multiplayer requiring in-game voice chat is inherently inaccessible to me. I can hear voices but without supplementing the voice with lip reading the disembodied speech is senseless to me. Only now in 2013 am I beginning to assemble the correct equipment for understanding some player speech in multiplayer.
Following the mega success of the original game, Halo 2, Halo 3, Halo 3: ODST, and Halo Reach added subtitles but only in the cut scenes, with none whatsoever during the gameplay. This ongoing oversight was due to the desire not to alter a successful formula and a misunderstanding about how subtitles provide accessibility. This mindset was so pervasive that in the last Halo title by Bungie, the franchise’s creator and developer, Halo Reach (2010) continued the franchises’ subtitle oversight.

A year after Halo Reach, 343 Industries’ takeover of the Halo franchise resulted in the 2011 Halo: Combat Evolved Anniversary. In developing the re-release, 343 Industries had valuable hindsight and distance from the franchise’s inception. The 2001 Xbox title received not only an HD update but added subtitles for both cut scenes and in game dialogue. Eleven years later, deaf and hard of hearing gamers are given equal access, and 343 Industries’ second Halo title, Halo 4, also featured comprehensive subtitles. Only now can I confirm all of these details, and now, long after the release of both games, am I interested in purchase because my borrowed copy of Halo 3 taunted me until I finally gave up feeling as if I was not included in the game.

Ironically, a new gaming choice is upcoming. Bungie’s new multiplayer based IP, Destiny, releases on September 9, 2014. Whereas Bethesda’s sudden reversal of its renowned single player based Elder Scrolls franchises is receiving a multiplayer makeover, Elder Scrolls Online, releasing in April and June 2014. Both are multiplayer based, a genre that I am just now participating in thanks to new adaptive equipment. If I choose a game, is one more likely to be more accessible or are we starting anew?

When we spend so much time coming from a place of no accessibility (such as no subtitles), we remain in a catch up race. Now in 2013, Halo: CEA and Halo 4 are available to me, but Halo 4’s much anticipated Spartan Ops (a single player/multiplayer hybrid campaign) does not have subtitles for its cut scenes. The multiplayer arena remains largely underserved by subtitles, even for in-game instructions.

I anticipated Telltale Game’s The Wolf Among Us throughout the summer of 2013, and after the announcement of the release date for the Xbox 360 I excitedly counted down. Based on my experience with Telltale Games’ The Walking Dead, I felt that I understood what I was spending my money on—both on gameplay and the quality of the subtitles for a narrative driven game. The Walking Dead caused frustrations due to cut-off or hidden subtitle text that occurred when conversational choices were displayed simultaneously with a character speaking. The problems did not result in game breaking inaccessibility, however. When the opening sequence of The Wolf Among Us played, my excitement soured. Despite enabling the subtitles, a spoken radio show (not music) was not subtitled. You can see my previous review of the game here.

The experience made me feel foolish. Due to my previous experiences with the developer, I bypassed my usual tactic of playing the free demo to assess its accessibility before buying the downloadable title. Playing The Walking Dead revealed subtitle problems that worsened in The Wolf Among Us because the radio show was a story clue for listening gamers, and the previously experienced subtitle troubles popped up as well. Experiencing the familiar disappointment due to the inaccessibility of a brand new game purchase is maddening. The narrative was not a piece of the game. It was the game. And any complete omission of the narrative was a less-than-experience. Given my excitement, if I played the demo first and experienced the radio show difficulty, would my changed expectations have mitigated my disappointment? I will never know.

Now, my excitement for the recently announced Telltale Games’ titles based on the Borderlands and Game Of Thrones franchises is tempered. As is our norm as disabled gamers, I will wait and see before jumping into the game. Instead, I can excitedly await the announcements for the remaining games on the Xbox 360 knowing what I am getting into while information continues rolling out for the new console generation.