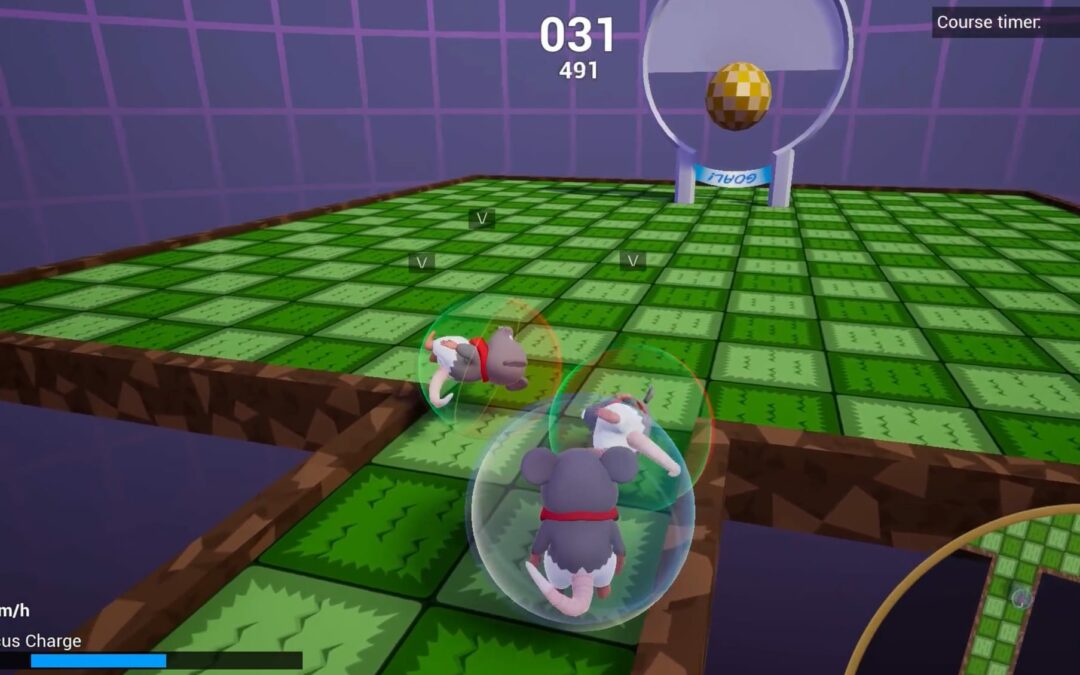 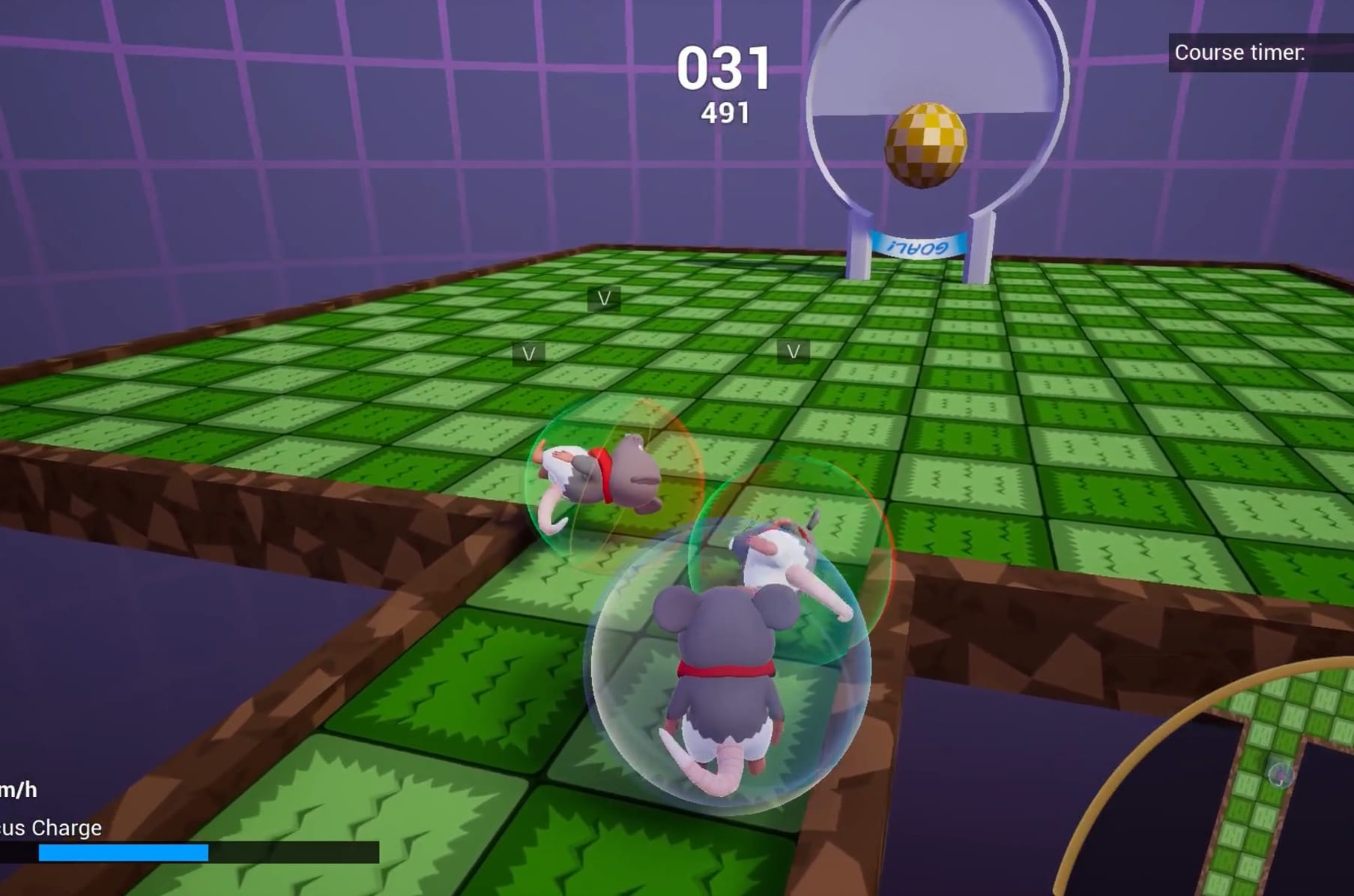 Sega’s Super Monkey Ball series is one of its most underrated and hasn’t seen a new entry since the PlayStation Vita’s launch nine years ago. In that time, love for the series hasn’t gone away, but Sega has failed to capitalize on it beyond an HD remaster of the Wii’s Banana Blitz with most of its mini-games stripped away. While marble rolling games are popular on game creation tools like Dreams, there hasn’t been a full-on spiritual successor of Monkey Ball’s presentation—until now.

While Monkey Ball itself has its roots in Marble Madness, that game and other marble rollers have you move the ball itself. In Monkey Ball, players “move” the ball by shifting the stage around. This means that players have to be a lot more careful with their stick movements, and it demands a bit more precision than a more forgiving game that gives you manual control over the ball. It’s an added layer of challenge and one that winds up making each victory over a stage more rewarding.

Rolled Out aims to fill the void left by Monkey Ball by having players roll a mouse in a ball around various grass and stone-filled locales. The game definitely plays it safe with the SMB-style stages, but it works out nicely, since there’s a sense of familiarity to everything right away. The stage designs themselves are where Rolled Out truly shines and actually manages to outpace any of the Super Monkey Ball games in some regards. There are more hazards present here as well as some visual tricks in stages that look almost MC Escher-esque in their design. They’re tough and provide a challenge, but it’s always a fair challenge.

Fortunately, retrying has no penalty, and while it would be nice to have a rewind function, it would also break the game to an extent. It would be a cool quality-of-life feature to see added into the game later just to have some more flexibility. That way, users could retry a particular section that gives them trouble instead of having to replay the whole stage. Often times, it’s easy to be off ever so slightly with a stick movement, and it’s a major time-waster to have to replay 99% of a stage just to get to that one tough section again. It leads to more fatigue and can make play sessions more aggravating than they need to be. The core game itself is a lot of fun, but there is some fine-tuning that can be done to improve it.

When it comes to accessibility, Rolled Out does an admirable job right out of the gate in a variety of ways. While there’s room for improvement, the game does a lot right without having more than an early access release. On the fine-motor side of things, movement is controlled with the left stick only, so as long as a player can use it, they can navigate around stages. The game’s difficulty level-based stages will mean that someone with minimal range of motion will probably need to stick to the cozy/easy stages, but there are enough of them to get quite a few hours of enjoyment. That holds even more true if the player aims to collect all the crystals in the level. This holds no real value beyond bragging rights, but it can be a fun way to test your skills after already beating a stage.

Given how tough some of the stages can be, it would be great to see an update where players can see the stage played through in video format. This may not be possible given the massive number of stages, but it would be nice to have something baked into the game so players who struggle with fine-motor movements can see how the stages unfold. That way, it’s possible to replay the video and examine it, then deconstruct how the solution was resolved.

On the visual side of things, Rolled Out features a surprising amount of accessibility options. Beyond the main user interface being quite easy to see thanks to its large text with bold colors in stark contrast, players have granular control over resolution scaling for UI elements. This means that it’s possible to make incremental changes to the UI without parts of the design becoming disproportionate. It’s similar to changing your display scaling on a computer, only better, since it ensures that the UI doesn’t suffer from weird changes like icons becoming too large or text becoming unreadable due to how it scales. Resolution scaling isn’t necessarily available in most PC games, and it makes a world of difference here for a visually impaired player.

The user interface as a whole is fantastic even for gameplay, as the pause menu features the same large, easy-to-read text across a bright background. Just simply having yellow as a main color for the menus helps a lot, and while it would be nice to have the entire UI finished (there are still static black and white images used in place of thumbnails for levels), what’s here is already impressive. For an indie title that wasn’t exactly bathing in tons of hype before its release, Rolled Out features an impressive suite of stages and accessibility options.

This holds true for the auditory accessibility side of things as well, since the game isn’t driven by story in the slightest and can largely be played without worrying about missing some bit of audible information. The music is bright and cheery, and while it’s nice when you’re playing, it doesn’t stick with you after the fact. This isn’t all that bad, as it does at least keep your blood pumping, and the game’s use of voice is fairly limited, so not being able to hear the few vocal lines isn’t that big a drawback. You will miss the “out of bounds” call verbally but see it right away on the screen in text. There is some room for improvement, and it would be nice for a victory to offer a non-verbal, visual indicator that the player has won. While veteran Super Monkey Ball players know that once a ribbon is broken, victory is achieved, it’s possible that this will be someone’s first marble roller, and they may not know that they’ve won right away due to the lack of a non-verbal indicator.

Overall, Rolled Out is a fantastic Monkey Ball clone that manages to impress quite a bit in its early days of release. While the lack of custom stages early on is disappointing, as is the lack of stage variety, the core gameplay is spot-on with what Monkey Ball veterans have grown to love. There’s a bit more modern polish with the graphics, and the UI is top-notch thanks to its large bold text, background colors, and ability to scale the resolution of UI elements while keeping everything proportional. It’s a ton of fun and has a surprisingly large amount of content at launch. Anyone disappointed by the HD remaster of Banana Blitz should give it a shot, as it does a better job of replicating the rolling obstacle course design of the mainline Monkey Ball games while offering some modern flourishes that make it a better experience.