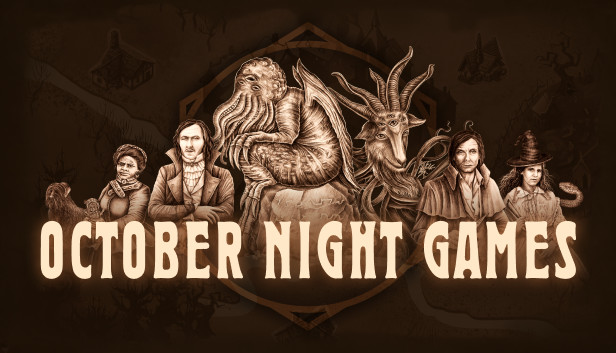 Protect the earth from a cosmic horror, or summon the elder gods in this spooky digital tabletop game! October Night Games was developed by German studio WhisperGames and released on PC just in time for Halloween. It’s a point-and-click experience, allowing you to play with just a mouse and explore dangerous environments as a witch or warlock. There’s turn-based combat, magic spells, dark rituals, and a surprising amount of accessibility features for disabled gamers.

October Night Games is one part point-and-click adventure game and one part atmospheric tabletop game. You can play with up to five of your friends, and you can each have different characters and familiars. The main goal of the game is to finish/stop the last ritual after 30 nights have gone by. You can be in one of two factions, those trying to stop the ritual (The Keepers) and those who want to summon the elder gods (The Changers) bringing about the end of the world. Much like the board game Clue, you don’t know who is on your side, so you must use reasoning and deduction to figure out whom to trust. All the while, you’ll be collecting ingredients and weapons for the occasional turn-based battle.

Disabled gamers with fine-motor impairments will be happy to know that the whole game can be played with just a mouse. You can access the map, inventory, character sheet, and even the main menu all without using the keyboard. There is a working windowed mode you can turn on in the options menu. This means third party programs like the on-screen keyboard are compatible during gameplay. There are timed rituals and battles in October Night Games, but thankfully gameplay modifiers exist that help lower the difficulty for the motor impaired and the cognitively impaired. You can turn on hints, allow ingredients to be visible, and even turn off the combat timer altogether. I didn’t notice any color-distinguishing items, so colorblind players shouldn’t worry. There is a retro film-style filter that could potentially be distracting for those with visual impairments, but you can turn that effect off in the options menu. For deaf and hard-of-hearing players, you can alter individual sound levels, and there are nice consistent subtitles with a dark background throughout the game.

October Night Games is a well-paced game with witchy lore based on real cultures throughout history. This game is also great for tabletop beginners, as it has many options that help balance the difficulty. Disabled gamers with fine-motor impairments can turn off combat timers for an easier play experience, and those with visual impairments can customize the HUD and turn off certain visual indicators. October Night Games has everything you need for a fun Halloween night, and it’s accessible to a ton of different kinds of gamers.