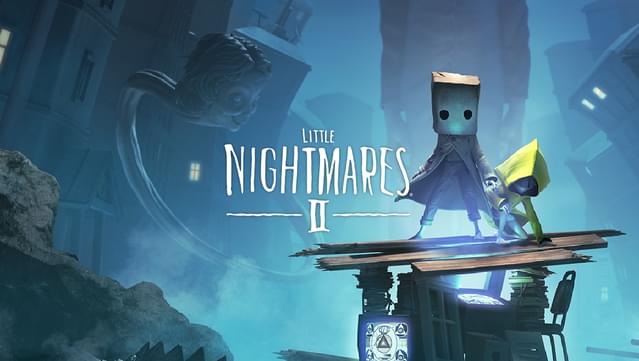 Explore the terrifying Pale City as you travel with tiny protagonists Mono and Six! Little Nightmares 2 is a puzzle platforming horror game developed by Tarsier Studios, published by Bandai Namco Entertainment, and is a sequel to 2017’s Little Nightmares. This game requires puzzle solving in a 2.5D world, while simultaneously looking after an A.I. companion. Little Nightmares 2 was released on PC, Nintendo Switch, Xbox One, and PlayStation 4, but I’m reviewing the PC version of the game. Little Nightmares 2 brings even more scares than its predecessor, but it unfortunately also brings more challenges for disabled gamers.

One of the biggest design changes in this sequel involves the addition of a travel companion. Six is the little girl protagonist from the first game who now accompanies Mono, the new playable protagonist, on their journey. However, she is much more than a glorified escort mission, as she is quite capable on her own. Six can help solve puzzles, distract enemies, and even help with combat. There’s also the option to hold her hand to guide her or keep her safe. Six is never a playable character in this game, but she is extremely important for making progress in the story.

Little Nightmares 2 has a few key improvements in accessibility for those with fine-motor impairments. The game now has fully customizable key bindings for mouse and keyboard configurations, but unfortunately controller customization is still absent. Like the original game, players will mostly be pressing interact, jump, and grab, though sometimes a combination of all 3 buttons. However, much more interaction outside of the 2D side-scrolling dimension is required this time around, and some traditional combat has been added. There are also improvements to the autosave function, which has become much more forgiving than the first game. The autosave indicator is still pretty vague, but now the respawn time is quicker, usually restarting mere moments before death. Unfortunately, the improvements to accessibility end there. This game has quite a lot of timed puzzles and moments that require fast movement. Little Nightmares 2, like its predecessor, doesn’t have any difficulty modes. This isn’t really a problem for the puzzles, as they are fairly simple, but combat can be quite challenging, and an easier difficulty would have been a great help. At certain points, Mono is given a random weapon, forcing players to defend themselves against the many enemies. Figuring out the rhythm of this mechanic can be quite satisfying, I’ll admit, but if the timing is off just a little bit, things can go south fast. Add on top of that enemies that can instakill, excessive button combinations, and a clunky cover system, and things become quite difficult to manage for disabled gamers with fine-motor impairments. The hospital section of the game was particularly challenging for me because the enemies (sinister dolls that came to life in the dark) were so fast that I reached the limit of my physical capabilities. Truthfully, I had to have an able-bodied person help me finish this section, and I suspect other disabled gamers will have similar issues dealing with the overall gameplay.

Gamers with visual impairments will have an easier time playing. Little Nightmares 2 is a very dark game, but there is a brightness slider in the options menu. I did notice a puzzle that had color-changing indicators, but it also had audio cues accompanying them, so colorblind players shouldn’t worry. Deaf players are going to have the most trouble playing Little Nightmares 2. Thankfully, there is no important audible dialogue in the game, so no need for subtitles. However, much of the game relies on the player being able to hear certain sounds. The story is conveyed through other means, but several puzzles require listening for the right audio cue for when to run, jump, or attack. One puzzle in particular near the end of the game requires the player to be able to recognize a specific song in order to find the right path forward. So, for gamers with hearing impairments, I just don’t think they’ll be able to progress very far in the game, much less get entertainment from playing.

Little Nightmares 2 tells a great story with twists and turns, different dimensions, and monsters whose origins are steeped in European folklore. Still, the gameplay is going to be challenging for disabled gamers. Enemies require fast movement to defeat, and timed puzzles are plentiful. Gamers with fine-motor impairments will have trouble with combat, and without visual cues for certain puzzles, gamers with hearing impairments will surely have problems. As of writing this review, there are no plans to add an assist mode or visual indicators for deaf players. Sadly, in its current state, Little Nightmares 2 is inaccessible to many disabled gamers.