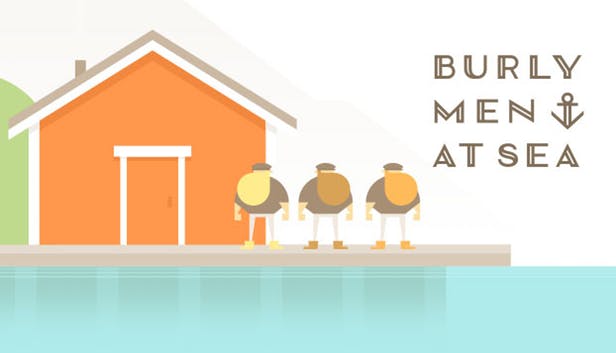 Three bearded fishermen decide to leave their life behind, and search for adventure on the open sea. Loosely based on Scandinavian folklore, Burly Men At Sea is an adventure game by indie studio Brain&Brain. Despite the name Burly Men is not an action game about pirates, but actually a short lighthearted romp through a sailor’s tall tale. It’s also fairly accessible for disabled gamers wanting to play a fun and simple indie game. Burly Men is a narrative driven game with point-and-click elements. I’m reviewing the PlayStation 4 version of the game, so I don’t know if the PC version is legitimately a point-and-click game. However, the game does seem to have those kinds of mechanics. You play as three different bearded individuals by interacting with objects, and finding the next important tidbit of info that will lead you on your aquatic journey. You don’t control each bearded man separately, they act as a unit and move together whenever you need them to go to a new area. Burly Men is a fairly linear game, but it has branching paths that give you different endings depending on the choices you make, the people you talk to, and the places you explore. For disabled gamers with fine motor skill impairments, the controls are pretty easy to maneuver. There is an aiming reticle that is used to hover over objects and people, this is accessed by moving the left control stick. The right control stick is used to move the characters where you want them to go. You can press the back trigger or one of the symbol buttons to interact with your surroundings. For transparencies sake, I will say that I personally had no problems using the controls with my dexterity. However, I fully realize that this particular set up in Burly Men could be confusing and somewhat difficult to control for those who can’t move the right control stick. I can just say that the game is not fast-paced in any way and there are no time limits to puzzles or exploration. Visually speaking, Burly Men is a very bright and vivid game. If need be, you can change the brightness level in the options menu. I didn’t notice any color distinguishing objects, so colorblind players and visually impaired gamers should not have much trouble playing. Hearing impaired players will not be at a disadvantage because there are subtitles and no audible dialogue in the game at all. Burly Men At Sea is a very relaxing game about adventure on the open sea. The art style is adorable and the main characters are simple but fun. Disabled gamers with hearing impairments should have an easy time reading subtitles and visually impaired players won’t have any obstacles. The controls are straightforward, but your mileage may vary. If you have fine motor skill impairments. It only took me a few hours to beat and it’s well worth a try if you like the sort of games.