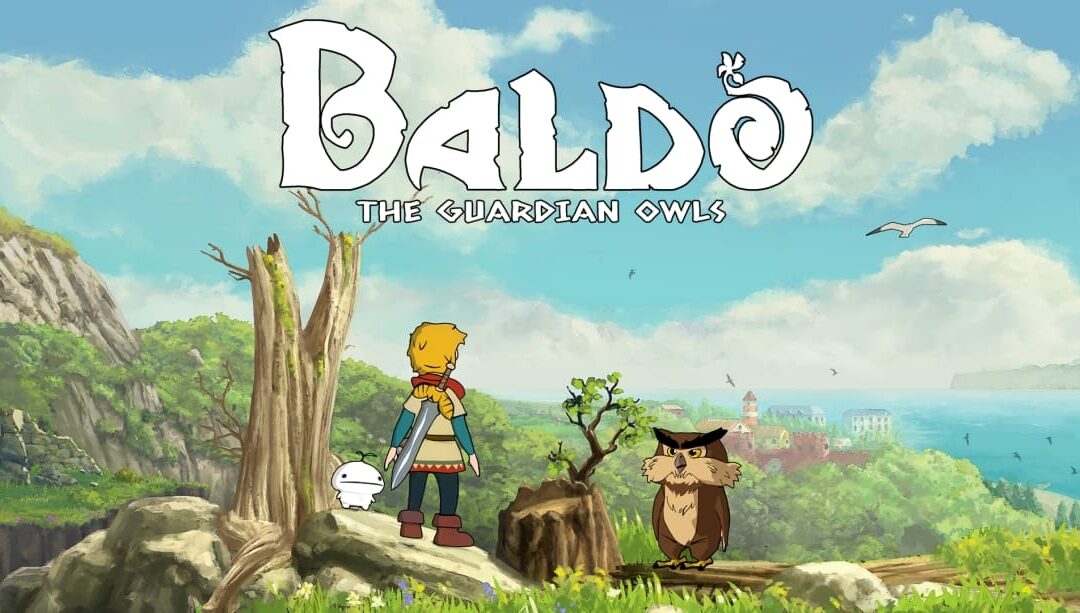 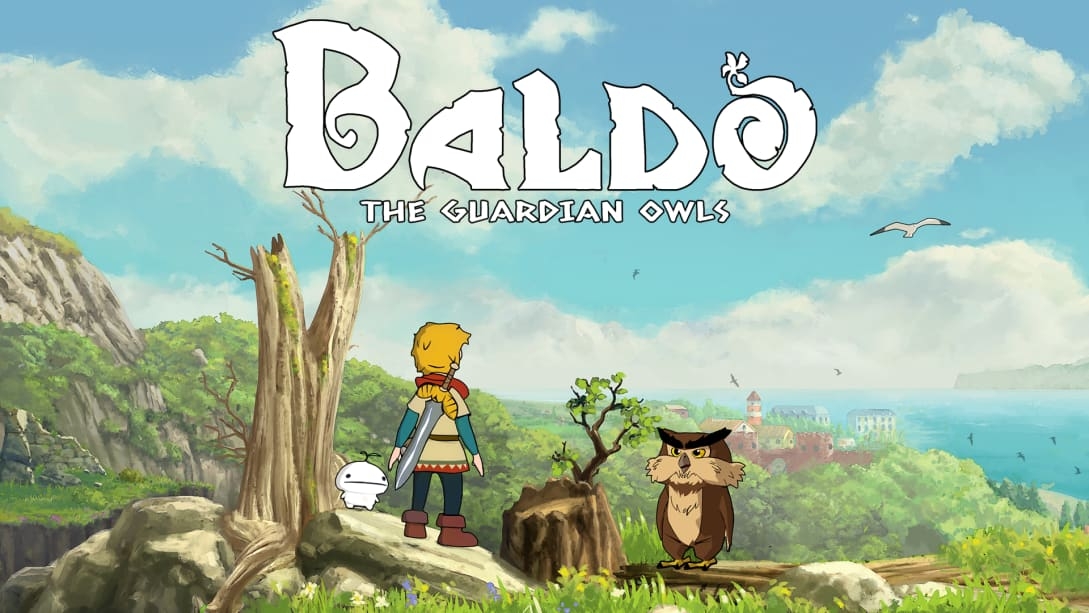 Ever since it was announced around two years ago, Baldo: The Guardian Owls stood out thanks to its bold cel shading and Studio Ghibli-esque visual design. The world comes alive and a new isometric Legend of Zelda-style experience begins–but not without some hitches right away. While some aspects of the game are surprisingly accessible, Baldo’s menu system causes problems before the player can even begin the game thanks to its gradient design. Darkened menu options in theory indicate what the player isn’t selecting, but they can blend in easily with the menu option that’s being selected. The end result is that the user can wind up picking every option but the one that starts the adventure unless they use trial and error.

Eventually, the player can start the adventure, and it’s a promising one compared to a lot of Zelda-likes. The cast is introduced fairly quickly, and before long you meet up with Baldo’s friend Luma. She’s both an ally for puzzle solving and the general helper (like Navi in Zelda) of the game, offering a rare companion for a Zelda-style game that makes it feel almost like a single player co-op adventure. This is huge because one issue that’s always been a personal challenge in Zelda games is the sometimes-obtuse puzzle-solving methods, and when Luma’s around the solutions are a lot more obvious, greatly cutting down the frustration level.

One fantastic part about Baldo’s adventure is that the puzzle solving is more user-friendly. There’s more logic to the puzzles than trial and error, which makes them more fun to solve when Luma’s there. When she isn’t, Baldo sticks to a more trial-and-error formula, and then things can get a bit less enjoyable, as there’s far less information about what’s around the player than in any Zelda-like game I can recall, including games like Oceanhorn 1 and 2 and The Swords of Ditto. It’s not an altogether bad thing though, as some will prefer that approach, but it would be nice to have some in-game puzzle help.

It would be especially helpful in darker dungeons that make it tougher to see details. When increasing the brightness on the display, it can help find things like a ladder when it couldn’t be found before, but it doesn’t do much to easily see other objects in the world that are similarly colored. It would be far better to have a high-contrast white blinking outline for interactive objects to make the dungeons easier to traverse. Still, it’s good to see that Naps Team tried something new to make the game easier to play with a non-playable companion. It’s just a shame she wasn’t used more to provide opt-in hints that assist in progressing through all the puzzle sections.

Baldo’s use of bright, bold text to highlight important characters and settings is actually both better and worse here than in most mainline Zelda games. The text is better because it’s much thicker and bolder, so it’s easier to read and fairly large without having to adjust it. This is fantastic and goes a long way toward building up goodwill for me, as I always love seeing more accessible elements baked into the game’s design by default. However, one area that needs improvement is how the differently-colored text is implemented. The colorful text has a habit of bleeding into itself, making the words stand out more thanks to the color contrast, but it’s also a bit trickier to see at times because the letters are too close together. Strangely, some differently-colored words leave a stray letter or two in the default white color, resulting in an unfinished feel when it comes to how the text was implemented. 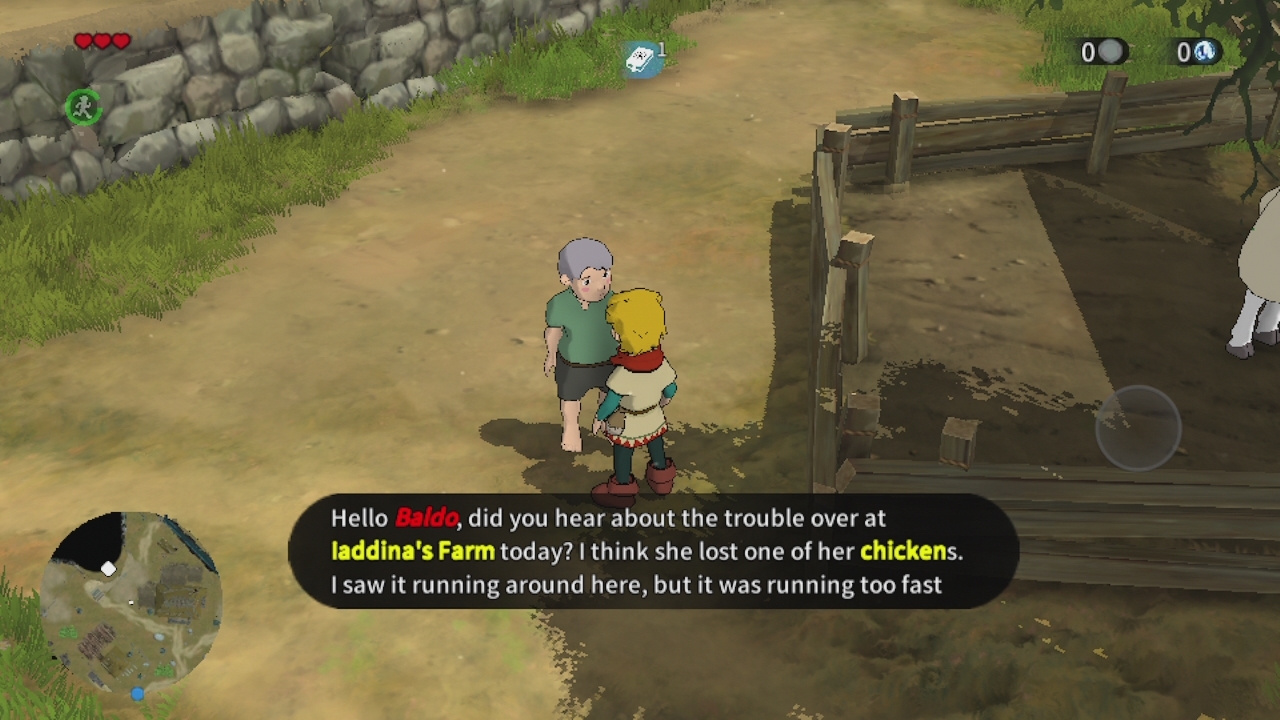 One area in which Baldo succeeds is changing up the character models to bold shadows when behind elements like trees to help ensure the player never loses track of where they are on screen. Given that the camera is fixed, this is a huge help. It would be nice to have a more zoomed-in mini-map on the screen, as the colorful dots representing missions are kind of tough to see. I’d also like to see a GPS-style overlay similar to open-world racing games to help guide players to the objective, since the layout of the world can be a bit confusing. As a more puzzle-centric Zelda-like, it’s fairly user-friendly when it comes to fine-motor accessibility. The only time repeated presses are really needed is to engage in combat, as holding down a button is good enough to push objects around and traverse. The left stick is used for movement and the d-pad for item selection, which is fairly user-friendly, and the button layout is logical and easy to remember, and even then, on-screen prompts show the button prompt when needed.

Overall, Baldo is a good but flawed Zelda-style game that may scratch the itch for those seeking a cel-shaded adventure. It’s a bit more puzzle focused but offers fine combat that’s easy to learn and does a solid job attempting to be accessible, but does need improvement. The default menu navigation is flawed, as is the bold text that can bleed into itself, making a well-meaning attempt at easier-to-read text fall a bit flat. There are also issues when it comes to environments being hard to see, but hopefully the accessibility problems are worked on as time goes on. The core experience is a fun one wrapped in a flawed execution that drags the experience down as a whole.