How to Build Accessible Multiplayer 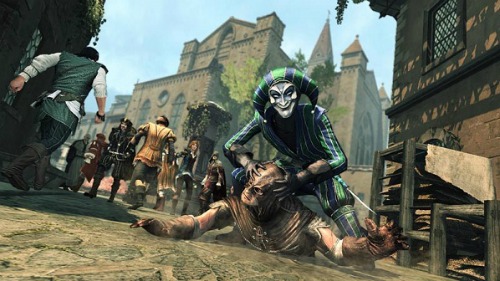 One of the prickliest problems in game accessibility is the question of how to make accessible multiplayer games that still keep the integrity of a fair experience no matter what a player’s ability or disability.

The simplest solution would be to allow players to use any kind of modded controller such as the turbo fire controllers which treat a single, held button press as a series of rapid taps. As a result, when playing a game like Call of Duty, a player using a turbo fire controller can simply hold down the button and the gun will fire multiple times instead of having to rely on rapid button presses. However, this solution, if enacted, would probably cause more problems than it would solve. Developers would most likely be bothered by the fact that these controllers are allowed into games, because it gives anybody who has them an unfair advantage. And they would be within their rights to want to see these controllers banned from multiplayer experiences.

Thankfully, there are less controversial ways to make multiplayer accessible. There are two methods, in particular, that are already accepted by some game developers, which just need wider acceptance in the industry.

The oldest solution to the multiplayer question is to allow for class-based multiplayer. One of my favorite multiplayer experiences of all times was MAG on the PS3. This game had no single player or storyline of any kind. It was purely a multiplayer game in which up to 256 players engaged in a single battle. Although MAG was a first person shooter, there were several different types of classes that a player could select, invest in, and eventually excel at. My favorite role, by far, was the medic, because instead of running around trying to rack up kills, I would simply wait until a comrade needed me, and then do whatever it took to run out an revive them. As a result, I ended up being in the top 15% of all MAG players for the amount of health I healed, and the number of players I revived. Because of all this, I was able to enjoy a multiplayer experience and become genuinely good at it without my disability affecting the gameplay. This illustrates the class-based solution to multiplayer accessibility. If more first person shooters had class-based multiplayer, it would allow more disabled people to play, since they could select roles that didn’t rely as much on quick reflexes and accuracy.

The second solution is one that has been most prominently displayed in one particular franchise. This solution is to completely reimagine the competitive multiplayer experience, turning it into a competition that rewards planning and thinking rather than simply running and gunning. This experience is found in the multiplayer of the Assassin’s Creed series. Again we have a game that I was able to excel at because it did not rely as much on speed as it relied on planning and even patience. There were matches where I had the least number of kills, but still won because I had earned thousand-point bonuses for killing my target stealthily. If more developers were to consider completely reimagining what competitive multiplayer looks like, more games like this would arise, and therefore the multiplayer scene, in general, would become more accessible.

Finally, there are certain accessibility issues in multiplayer that don’t require designing an entirely new style of gameplay, or even including extra classes. These issues can be solved by simply redesigning some key elements within certain games. For instance, most first person shooters have multiplayer components that are inaccessible to those who are colorblind or otherwise visually disabled, because they only differentiate between the two different teams by color and other fine details. Instead of displaying an enemy’s name in a different color, a developer could use an easily recognizable symbol, such as a skull, which opponents of that player would see instead of the gamer’s tag, making it easier for colorblind gamers to enjoy FPS multiplayer.

In general, the question of making multiplayer accessible for gamers with disabilities can be solved in various ways. But the first thing that must happen is that developers must see the need to make multiplayer experiences which are accessible. For that to happen, more word has to be spread about this issue and about game accessibility in general.