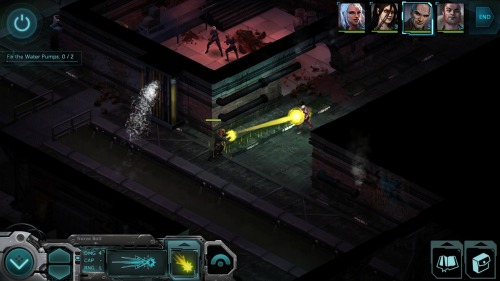 Harebrained Schemes has announced that Shadowrun: Dragonfall, the expansion DLC for Shadowrun Returns, releases on February 27, 2014. The full-length campaign is set in Berlin and will launch on Windows, OSX, and Linux as well as a DRM free version available on GOG.com.

Shadowrun: Dragonfall sets the player with a team of shadowrunners, mercenaries who live on the fringes of a society where magic and technology exists side by side, against a new threat. The only clue is Dragonfall, a historic event from the early days of the Awakened world. The expansion touts a more player-driven, full-length campaign that includes multiple missions which the player may choose whether or not to accept as well as a team of shadowrunners with fleshed-out backstories and personalities. Along with Berlin as a new locale, the expansion boasts new in-game features such as weapons, cyberware, and enemies. The content ranges from a long-range sniper rifle to battling gargoyles. Multiple enhancements to the game editor allow for increased quality in the community created content including the ability to use assets from both the expansion and the original Shadowrun Returns campaign side by side.

Additionally, the expansion brings to the series a Save Anywhere functionality, as opposed to a checkpoint save system, in both the expansion and in Shadowrun Returns. Check out Shadowrun: Dragonfall’s trailer here.

Shadowrun Returns is a return to isometric RPGs that includes a number of accessible features which are fully expected in Shadowrun: Dragonfall.

For disabled gamers with fine motor disabilities, Shadowrun Returns features turn based combat. During exploration, movement is free with a click directing the character to the desired location, and during combat movement is turn based, where the extent to which a character can travel is clearly delineated by the number of available action points. The combat is strategic with choices of ranged or melee weapons as well as magic and additional support such as elementals and drones. The turn-based combat allows for the needed time to assess, plan, and carry out a strategy without disabled gamers needing to be concerned about real time combat controls or missed cues. Gameplay is point and click, requiring more menu navigation than complex key controls.

For visual disabilities, the series relies on clearly delineated icons and always-readable text. For deaf and hard of hearing gamers, the series is communicated nearly entirely in text. Without voice acting, the dialogue provides not only the text of the verbal conversation but also includes nuanced descriptions of the speaker, the environment, as well as any verbal and nonverbal inflections in the exchange.

The inclusion of a save anywhere feature will increase the game’s pre-existing accessibility by allowing disabled gamers to restart from player-specified saves rather than checkpoints when a disability related difficulty with the game results in a game over.