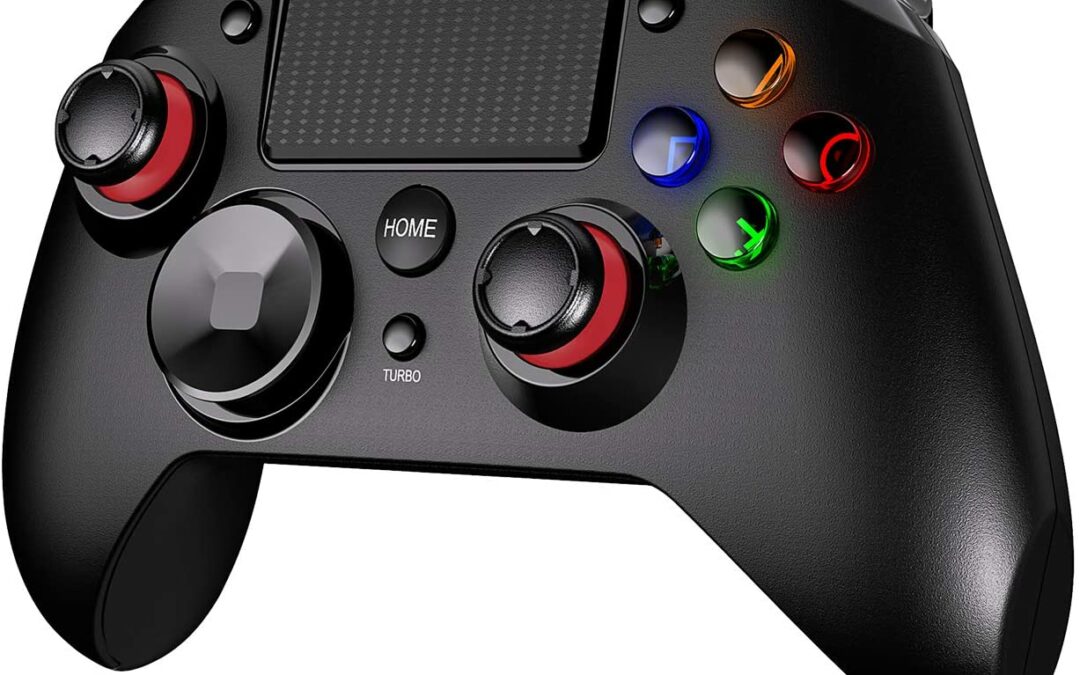 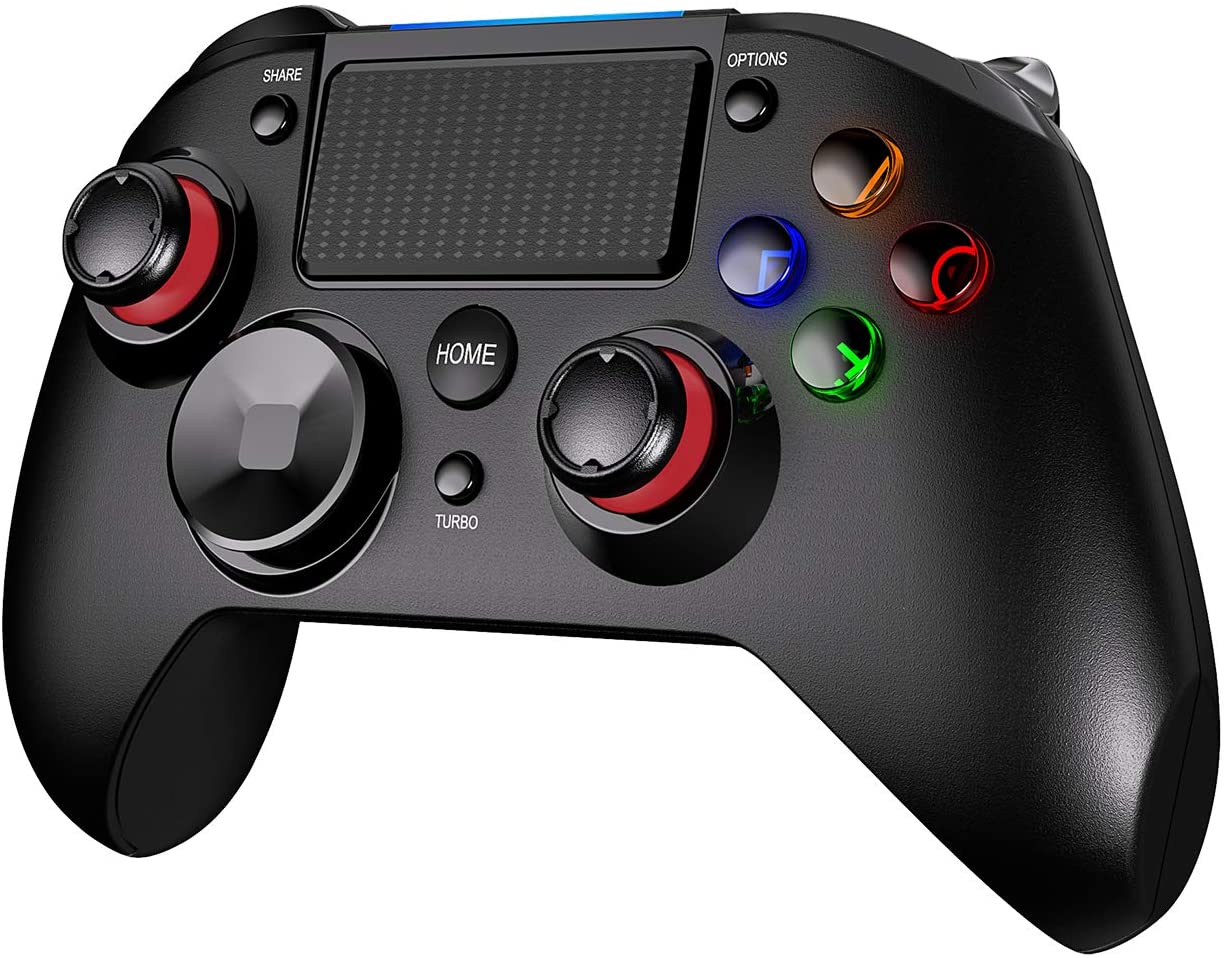 For all its success in gaming over the past 25 years, Sony has somewhat struggled with controllers. Companies have come along in time to help resolve issues, but with the PS4, there haven’t been many affordable options. The PS3 at least had some good wired options with the Battlefield 3 pad being the best of the bunch, but North America hasn’t seen much for those who love the PS4 but want a more Xbox-style controller for certain games. Sony has had an interesting history with controllers and in 25 years has yet to make one that felt truly perfect for all kinds of games on their platform beyond the DualShock 2.  Sony’s first controller had a bit of an identity crisis, essentially looking like a Super Nintendo controller with hand grips, two extra shoulder buttons, and charm symbols instead of traditional letters on their face. It was functional, but Nintendo and Sega putting analog sticks in their designs forced their hand to make changes. While the Saturn stick was part of an optional controller, Nintendo made it standard with the N64 pad, and to their credit, Sony changed things up and created the Dual Analog controller.

When Nintendo popularized rumble, Sony followed suit with the DualShock, which took it to the next level and became the definitive PlayStation-style controller design. The PlayStation 2 pad was essentially the same as the DualShock only with a bit more heft to it. However, it was the only PlayStation controller that didn’t receive some kind of mid-generation refresh until the PS4, so it was definitely a great controller for its time, and the industry didn’t change enough midstream to warrant pad changes. One thing Sony should be praised for is their hardware lasting because my original DualShock 2 from 2000 is still working fine, as is my DualShock from 1998. The PlayStation 3’s launch in 2006 saw Sony go away from rumble and into motion control with the SixAxis, which remains their most divisive controller.

It was a lot lighter than any of their prior controllers including the original stick-less PS1 pads and felt cheap in the hand even if its parts were quality. The controller’s triggers were by far its biggest sticking point and were slanted downward, making most games that relied on them feel a bit odd. Racing games relied on them for acceleration and braking, and first-person shooters used them for precision targeting and shooting. With the PS2, the problem could be resolved a bit for racing games by using the analog face buttons, which Gran Turismo did wonderfully. For shooters, most went with the less-comfortable option of using L1 and R1 instead of the triggers, which had the benefit of being snappier button presses but still felt unnatural in the hand. The smaller controller size also made it easy to bump thumbs with the symmetrical stick design and usage of both sticks at once.

Over time, the Xbox-style offset sticks have become the norm so much so that even Nintendo used them for the Switch’s Pro Controller. Sony stuck with the same symmetrical stick design, but while the DualShock 4 kept rumble, the gyroscope, and put more distance between the sticks while extending the size of the hand grips to become the most comfortable PlayStation controller ever, it still suffered when it came to triggers. They are mostly flat with a slight curve and still don’t feel as good as even the Dreamcast’s triggers from 1999, let alone a modern-day Xbox pad. Enter PICTEK, a little-known company with a solution. Their 3-in-1 controller functions on a multitude of devices but is primarily a PS4 controller.

This controller combines offset sticks with Xbox One-style bumpers and triggers, larger, raised face buttons, an Elite-style d-pad, and turbo functionality while retaining the Touchbar and even keeping the gyroscope intact for motion-assisted aiming. In a lot of ways, this is the perfect hybrid of a PS4 and Xbox One controller, and for the most part, it fully succeeds at what it’s trying to do. Out of the box, it works like a dream on the PS4. Just hook it up with the included micro USB cable, charge it up for a bit, and you’re golden. The lightbar is still present but doesn’t soak up battery life like the DualShock 4, and the pad feels great in the hand for the most part. The triggers especially just feel perfect, and after using them for just a day, it felt impossible to go back to the DualShock 4 for platformers and racing games.

The triggers on the DualShock 4 were honestly so uncomfortable to use that I re-bought OnRush on the Xbox One just to play it with the Xbox One pad. The DS4’s triggers are functional but not fun to use, and they don’t contour to your middle fingers like the Pictek pad does. The bumpers aren’t quite on par with those on the newer Xbox One controller where, like the 360, you can hit them from pretty much any direction, but they’re better than the first set of Xbox One controllers where you had to have your fingers at a specific angle to use the bumpers. You have a few angles to use off to the side for accurate presses, but unlike the newer X1 pads, you can’t hit them from the top and press the bumper. In that regard, the DualShock 4 is superior since you can hit the L1/R1 buttons with ease at any angle.

The offset stick design is comfortable but does suffer due to the sticks being made of plastic and not having any kind of rubberized surface on them or grips on the trim a la the modern-day Xbox One pads. Of all the third-party and first-party controllers I’ve used, including SteelSeries, 8bitdo, and the previously mentioned Battlefield 3-branded PS3 pad, these are the worst feeling sticks out of the box. However, they are precise, and with some Xbox One stick covers, they feel right in line with first-party and third-party controllers. It’s just a shame that an extra step is needed to get there.

The controller’s raised buttons are fantastic and really do help make button presses more responsive, especially when combined with games that feature rapid fire. There may not seem like a lot of games on the PS4 that would benefit, but in my library alone, I had Ninja Senki DX, Resogun, and Mega Man 11 that get quite a bit easier with the functionality. Unlike the 8bitdo pads, where you can easily accidentally activate it while hitting another button, it’s more difficult here due to the raised buttons, so it’s a lot more user friendly, and the usage of bright lights on the face buttons is great if you have trouble seeing the symbols on a normal PS4 controller.

The large 8-way d-pad is something that I hadn’t used before this controller, and I found that it worked quite well overall. The normal DualShock 4 d-pad is already fantastic, and when combined with the large hand grips, feels like a natural, form-fitting controller for side-scrolling games. However, having your thumb in the center of this 8-way d-pad and basically using it as a rocker to move around still feels great and is a bit easier on your left thumb because you don’t have to move it as far or as quickly. It’s a pretty radical change from the norm if you haven’t used an Elite controller before, but it winds up being much easier in longer play sessions, and I found I had less joint fatigue using this controller than the DualShock 4 for most games, especially anything that’s trigger heavy.

Overall, at about half the cost of a DualShock 4, the PICTEK PS4 controller provides a viable alternative to someone wanting not only a secondary controller on the console but one that offers a completely different feel to a DualShock 4. If you’ve been hankering for offset sticks on your PS4 controller, this is the most affordable option I’ve seen in the console’s nearly seven year history, and it feels quite well made given the price point. I have no worries about any parts going bad, and it feels as sturdy as most first-party controllers I’ve used. It’s a great pickup for anyone who wants a controller that’s easier on the hands or has some issues with the DualShock 4’s design.