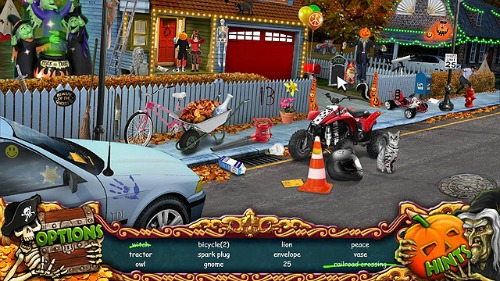 Casual Arts Mobile released Halloween: Trick Or Treat which is available in the digital app stores for iOS, Google Play and Amazon. The game was previously released on DSiWare, PC, and Mac.

Halloween: Trick Or Treat is advertised as free download with in-app purchases available. However, my free download from iOS allowed me a few rounds of mini games before requiring the purchase of the $2.99 app before continuing.

Halloween: Trick Or Treat is a series of mini-games tied together by a brief narrative about the Halloween night of Mike and Sally, two young siblings trick or treating in a neighborhood with an overabundance of creepy neighbors. Mini-games include a memory game, a hidden objects game, and jig saw puzzles. While a child friendly game the hidden objects games includes a variety of bizarre items that are not necessarily in a child’s vocabulary. The items range from the academic, zulu shield, to the play on words, a diamond is a baseball diamond, to questionable, jackpot is 777, to the strange, a wing nut.

The hidden objects games are the most common and spamming the screen by rapidly pressing the touchscreen results in a “broken screen” warning to search for the listed objects. The Halloween themed games are simple fun on the go with a story about the siblings loosely stringing together the games.

Halloween: Trick Or Treat is a straightforward series of mini games that provides the needed time to complete the mini games, no penalty for pressing the wrong area of the screen, and communicates its instructions clearly in text.


For visual disabilities the game provides barriers. The most common game, the hidden objects game, uses shadow both for hiding objects and in the rendering of items. Cleverly working scissors into a gate’s iron grill is different than bunching items on a feast table with the table in shadow and only the dark green top of a pineapple visible. Halloween: Trick Or Treat includes both moments. However, hints are available which highlights an unfound item on the list and is usable as often as needed but on a timer in between uses. The other mini games can be skipped altogether.

Have you played Halloween: Trick Or Treat?

What Halloween themed games are you playing?