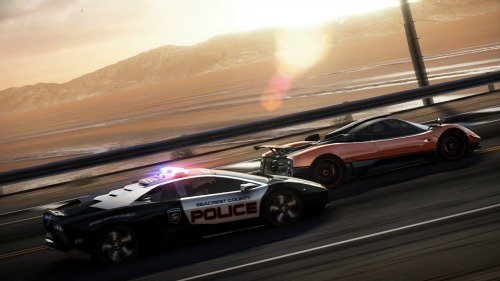 Whether it’s a rubber-burning racer or a historical fighter sim, vehicle simulations can provide some of the most immersive experiences in modern gaming. Vehicle sims like these have a tendency to pull players deeper into the action of a game than most other genres, and deserve to be looked at separately when addressing the question of genre accessibility.

Vehicle sims come in all shapes and sizes, but the genre can be divided into two prominent sub-genres: racing simulations and combat simulations. Although both are vehicle simulations, these two sub-genres have very distinct barriers.

To begin with, racing games, such as Need 4 Speed or Mario Kart, pose challenges to players with sight disabilities, because, although not common in more causal style racing games, mirror matches, where everybody uses the same type of car, can be very hard for the sight impaired to negotiate. It helps if the player is playing a more causal game, such as Mod Nation Racers or Twisted Metal, because there is often times so much customization that running into an identical car is virtually unheard of.

However, even when running into a mirror match in more realistic racing games, it tends to be obvious which car is the player’s since the camera is almost always located directly behind the player. This perspective makes it easier for those that cannot distinguish color to determine which car they are driving.

The only other problem visually disabled players might run into with racing games is when picking up power ups in games like Mario Kart, since often times color is used to distinguish between weapons and traps.

Players with a hearing disability should not have a problem with the vehicle racing genre as a whole, since in most modes sound is only an add on, and even if it does communicate particular information, the information is not vital to winning the race. For example, in Need 4 Speed, the game uses sound in the form of a police man coming over the radio to warn the player when they are going to run into obstacles like a roadblock.

The main issue that players with fine motor challenges will need to address when playing racing games is how forgiving the game is. Many racers that strive for realism will end up punishing a player for mistakes like crashing into a wall by making it impossible for them to recapture the lead without running the race perfectly. However, in more casual type games, there are usually ways to cope with mistakes like these, for instance, by using a power up to blow the next opponent away, or by finding a shortcut that puts the player in the lead.

Combat sims, which are usually specialized flight sims, have a completely different set of challenges. Because the vast majority of combat sims take place in the air, the controls can be much harder to handle for players with fine motor challenges. This also means that most games like the IL 2 Sturmovik series have an extremely complex control scheme that requires the use of multiples fingers in tandem to play the game proficiently. Games like these also require quick reflexes, which can be hard for most gamers with fine motor challenges.

Also, most modern combat vehicle simulations rely heavily on sound—not so much to tell a player what is going on, but more to indicate the direction of activities, such as the direction from which a player is being shot at.

But perhaps the biggest barriers within the combat vehicle simulation sub-genre exist for those who are sight disabled, since these games are predicated on fights between fast moving opponents across great distances. As a result, the player will have to distinguish the small labeling text that all too often lacks good contrast with the sky, water, or other areas surrounding it.

In general, vehicle simulations should probably be examined on a game by game basis, because, taken as a whole, there are serious accessibility barriers for gamers with most physical disabilities, even if individual games within the genre do not have some of these broader challenges.