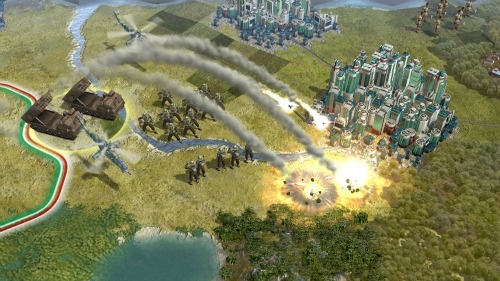 In this third installment of our series examining genre accessibility, we will look at strategy games. These types of games can be grouped into two broad categories: real time and turn based. Although they have similar strengths and weaknesses, they merit independent examination because the mechanics are very different.

Perhaps the most popular example of the turn based strategy game is the Pokémon series of games for Nintendo handhelds. Because these games are turn based, it does not matter if a player takes ten minutes or ten seconds to take their turn. There’s no penalty for slow reaction, so a player can set their own pace. As long as the player can access the handheld interface, these types of games should be virtually barrier free. On the other hand, the popular PC strategy game Civilization illustrates a couple of problems that some disabled players might have with turn based strategy games.

First, the overhead perspective common to the Civ series and other strategy games means that the player is looking at a lot of very small units. Players will need to be able to distinguish between the details of the different units in order to play the game effectively. Furthermore, in such games, all teams use the same types of soldiers and workers. The only way they are differentiated is by the color of the symbol over their heads. As a result, players with sight disabilities may have trouble when interacting with units from different teams.

Also, due to the overhead perspective, in a large portion of turn based games the player is manipulating units around a large map. As a result, a player needs to be aware of what is going on at all times in various parts of the map, particularly home base. The way they do that is by listening to the audio cues in the game, as most strategy games have an alarm system that tells the player when they are under attack or when they need to undertake certain actions. As a general rule, these alarms are not adequately subtitled, often relying on small lines of text to inform the player of critical actions, which, if left undone, could cost them the game.

However, since turn based strategy games run all along the spectrum from RPGs like Pokémon and Final Fantasy to empire simulations like Civilization and R.U.S.E., each game must be examined individually when determining what is accessible. But in general, turn based RPGs are virtually barrier free, while most every other kind of turn based strategy game poses serious barriers for the hearing and sight disabled.

When it comes to real time strategy games, Starcraft is arguably the most popular on the market. Its unique balance of three distinct races and its masterfully executed mechanics have drawn praise from gamers and critics alike. However, all RTS games including Starcraft pose some serious accessibility concerns.

The largest concern is due simply to the fact that they are real time games. The player must be continually ready to react to a changing battlefield, which not only requires quick reflexes but also the ability to hear various alarms within the game (which tell the player when they are under attack) and the ability to distinguish between friend and foe. However, some of the most popular RTS games, such as Sins of a Solar Empire, have factions which are easily distinguishable. As a result, the visually disabled player only needs to worry when they run into mirror matches.

Basically, all of the concerns within the turn based sub-genre are amplified within the RTS sub-genre because there is always the tension of having to react fast enough to accomplish goals. Combine that with the fact that many RTS games require using of large groups of units (macroing) and single units (microing) effectively, and it’s easy to see why these games require quick reflexes.

However, the saving grace of this sub-genre is that, like their turn based counterparts, they usually have a relatively accessible control scheme. A player needs only the ability to move a cursor around a map. As a result, most strategy games in both sub-genres can be played with one hand, and when on the computer, the player usually has the option of designing their own layout, since most RTS games allow the player to assign number keys one through nine as hotkeys.

In conclusion, strategy games tend to be divided into two groups without much middle ground. Either a game features simple controls and not much that would make it inaccessible for those with auditory and visual disabilities, or they feature massive battles that require quick thinking and reflexes, and the ability to see and hear the slightest detail.